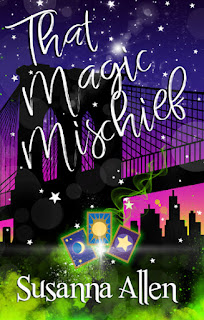 That Magic Mischief
Susanna Allen
Genre: Paranormal contemporary romance
Publisher: Ally Press
Date of Publication: October 01, 2021
ISBN Print: 978-1-953290-12-0
ISBN eBook: 978-1-953290-13-7
ASIN: B09G97RGZF
Number of pages: 326 pages
Word Count: 82,000
Cover Artist: Tamara DeStefano
Tagline: A heartbroken amateur witch is in over her head after casting a spell that  actually works—will the handsome Irish artist she fancies come to her rescue?
Book Description:
What was the point of being a witch if Annabelle Walsh couldn’t manage a spell to fix her broken heart? As a dedicated dabbler in all things esoteric, she figured she could speed up her healing process when she’s dumped out of the blue by her boyfriend... but nothing’s working.
An idle wander into an unfamiliar new age shop adds the bit of magic in her life that she’d been looking for: an interfering, mischievous Pooka called Callie who’s determined to turn Annabelle’s life around— mostly by turning it upside down.
Suddenly, Annabelle’s too busy to brood, and her writing career begins to take off; in fact, it’s during a brainstorming session for an off-off-off-off Broadway theatre production that she meets tall, dark, and handsome Jamie Flynn, an Irishman in New York who seems to be keen at first sight, if not in love quite yet. As Annabelle gets her life back on track, she starts to see the difference between a real life, a real career, and a real man… and all it took was a little magic mischief.
Amazon     BN     AmazonUK     Kobo

Annabelle lit candles and sat down on the floor. She tried deep breathing for a few seconds, and feeling slightly calmer, took her tarot deck out of its wooden box and shuffled the cards. She let her breath flow in and out; it lulled her, cleared her head, calmed her down, and the smell of the burning wax soothed her, as she tried to formulate a mature, non-attached-type question. Not: Will Wilson come back to me, please, please?

Her breathing hitched. Yeah, definitely not that. “Okay. The issue is… Wilson. Um. Do we have a future together?”

She turned over a card. The Knight of Pentacles, reversed.

“Damn it.” Reversed, this Knight meant carelessness, a standstill in affairs. “Okay, so if things are at a standstill, that means they can move forward again, right?” She turned another card.

Three of Swords. Sorrow due to loss. Well, duh, Annabelle thought, and then winced, as if she’d said it out loud. As if the cards could hear.

She turned over the next card. The Wheel of Fortune. Not always a good sign, though, as it could mean an unexpected loss rather than a gain, even when in the upright position as it was now. “I don’t know what any of this means,” Annabelle mumbled, knowing full well what it meant. This was all about the now, and she didn’t like the now.

At moments like these, Annabelle found it was usually a good thing to stop pulling cards.

Queen of Cups. She shivered. That was her court card. Good natured, intuitive, a loving female figure, one whose imagination often outweighed her good sense.

Strength. The beautiful woman grasped the lion by the jaws, symbolizing the power of the human spirit to overcome any obstacle. Yeah, yeah, yeah.

The Sun. “Summertime? Two months from now? I’ll be better in two months?”

Annabelle gathered up the reading and returned the deck to its box.

She continued to sit. She tried to go back to the deep breathing but got bored. She thought about how she’d never had much luck reading Wilson’s cards. Maybe it never worked because it was almost always post-coital, the only time he was ever mellow enough to entertain the idea. She could never make sense of his configurations, none of the images seemed to relate to the others, she’d pull card after card and make a spread that was meaningless, confused. He would lose interest and patience. She would feel as though she’d failed. Ugh.

She’d like to blame it all on him, but she supposed her own muddled thinking got in the way as well; always hoping he was asking about the future of their relationship, whether she would marry him, whether she would like an emerald-cut diamond in a platinum setting, as opposed to a three carat marquis-cut in white gold.

But not today. Rising, she left the candles burning and got some incense going as well.

About the Author:
Susanna is a graduate of Pratt Institute with a BFA in Communication Design and counts The Village Voice, New York Magazine, and Entertainment Weekly as past design experiences. Born in New Jersey, she moved to Ireland for twelve months—in 1998. She is the author of the Shapeshifters of the Beau Monde series, published by Sourcebooks: A Wolf in Duke’s Clothing, an Amazon Editor’s Best Book of the Month, is available now; A Most Unusual Duke debuts in December 2021.
Writing as Susan Conley, she is the author of Drama Queen and The Fidelity Project, both published by Headline UK; Many Brave Fools: A Story of Addiction, Dysfunction, Codependency…and Horses is available from Trafalgar Square Books. Susanna is living her life by the three Rs—reading, writing, and horseback riding—and can generally be found on her sofa with her e-reader, gazing out a window and thinking about made-up people, or cantering around in circles. She loves every minute of it.
https://www.susannaallenwriter.com
https://twitter.com/susannaawriter
https://www.instagram.com/susannaawriter/
https://www.goodreads.com/author/show/20487105.Susanna_Allen 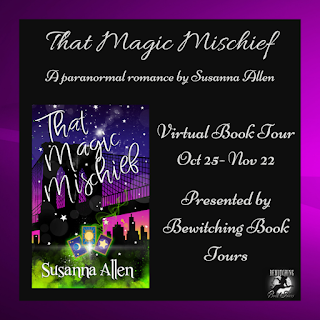 a Rafflecopter giveaway
at November 03, 2021