So I’m a romance author. That means a lot of things, but mostly, it means I crave a happily ever after so much that I feel inclined to write about it, over and over again.
Is there a reason I feel compelled to figure out a happy ending for every heroine in every book I ever have – and ever will – write? Is it because reality is so terrible that I just need to escape from it, through the written word?
Let me tell you how my husband and I met…
I was 25. He was 31. I was at a point in my life where I was finally happy; secure, comfortable being single and living on my own. Throughout college I dreamed of finding Prince Charming and settling down and birthing adorable little babies. Unfortunately, the boys I dated in college, and shortly thereafter, were anything but Prince Charming. Eventually I realized I was having far too much fun simply hanging out with my girlfriends and I figured if Prince Charming existed, he’d come along... Someday.
I should mention that, at the time, I lived in Louisiana and the hubs-to-be lived in Michigan.
Before you think, how in the world...? Let me add that I am originally from Michigan and the vast majority of my family still lives there.
We met in May.
A dear friend was graduating from broadcasting school (in Michigan) and asked me to go to the ceremony and after-party. I had some vacation time, and I hadn’t been home in a while, so I decided to burn two weeks and spend it up north.
Turns out, the hubs-to-be was graduating from broadcasting school, too. At the same time. In the same class. Notable event from the graduation ceremony: My girlfriend’s brother and I sat in one row, while her parents sat two rows behind us. I asked my future in-laws to please move for a moment so I could take a picture of my friend’s parents.
My future husband and I didn’t officially meet at the ceremony. Nope, not yet.
It was at the party, afterward. My friend’s brother and I sat at a table in a corner, indulging in alcoholic beverages and pretending we were commentators on The Talk(or whatever version of that show existed back in 1998), while my social butterfly friend flitted about the room, celebrating with her classmates. At one point, she was out on the dance floor with my hubs-to-be and a few minutes later, she came bee-bopping over to our table.
“Hey, Tami. See that guy out there?” she asked, motioning toward the dance floor.
I nodded.
“He wants to know if you’d be interested in a one-night stand.”
What?!
(The joke I like to tell now a-days is, “He sure ended up with a hell of a long one-night stand.”)
I was naturally affronted and maybe a little intrigued (oh yes, this is reality; you are not reading a novel right now), so I downed the rest of my drink and headed out to the dance floor. To this day, I have no earthly idea what I intended to do or say. All I know is that we immediately began dancing, then we eventually took a break so that I could go to the restroom, and when I returned, he had a plate in his hand with a piece of cheesecake perched on it, and he fed me the cheesecake.
Let me be clear: He fed me cheesecake. Swoon.
I probably would have gone home with him then and there, except the biggest joke of all is that he absolutely was not that kind of guy. He had been trying to be funny. Instead of a laugh, he ended up with a wife. Joke’s on him...?
We spent quite literally every single day of the rest of my vacation together. I met his parents (officially). We discussed bridesmaids and groomsmen (nope, not kidding). I met his best friend, who had to give his stamp of approval before the hubs-to-be could officially date me. (Apparently he had a history of picking up the wrong kind of woman. Maybe he should have changed his pickup line. Or maybe not.)
The day I left to fly back home to Louisiana, I had his demo tape tucked into my luggage. At the time, I worked in PR, and was friendly with the general manager of one of the local television stations located in the city in which I lived. The hubs to be was trying to break into the industry, and wasn’t particular about whether that would occur in his home state of Michigan or somewhere else.
We met on May 1st. The week of Memorial Day, he flew down to visit me and interview for a job at the local television station. They offered him the job that same day.  My BFF had to meet him and give her stamp of approval (hey, fair’s fair, right?).
At the end of the week, he flew home and gave his two weeks’ notice at the current job. He moved into my apartment six weeks after we met. And proposed at Christmas. We were married six months later. And still are, 22 years later.
Mostly happily.
So why do I write romance? I guess the answer is: because it happened to me.

Santa’s Destiny
Tami Lund
Genre:  Paranormal Romcom/Chick Lit
Publisher: Tami Lund
Date of Publication:  12/1/2021
ISBN:9781005702335
ASIN:  B09HQ2XDFZ
Number of pages:  68
Word Count: 17,851
Cover Artist: Kathryn R. Biel
Tagline: This elf is in for the sleigh ride of her life
Book Description:
Des (don’t call her Destiny—she hates that name) is an elf with a problem. A jolly, red-suit wearing, gift-bearing, reindeer-loving problem.
Turns out, someone has stolen Santa Claus’s magic. And it’s three days before Christmas. What’s an elf to do?
Help him out, of course. That’s her specialty, after all.
Except that creates a whole new problem: Des has to work closely with the Man in Red while keeping her presents under wraps, because there is definitely one thing she will not do.
Ride in Santa’s sleigh tonight.
Amazon US      Apple      Nook      Kobo

“I’m already up,” Santos, aka Santa Claus, replied while rolling his hips, which earned him a scowl from me and a giggle from his companion.

I turned to the blond bimbo. Okay, to be fair, I had no idea if she was a bimbo. Santos had the ability to pull pretty much all women from rocket scientists to, er, candy cane lickers under his seductive spell. Truth be told, they all became candy cane lickers once he set his sights on them.

“Listen, honey, he’s a one-and-done kind of guy. He’ll use you to get his rocks off”—Christmas euphemisms were Santos’s thing, not mine—“and walk away and never talk to you again. Is that what you really want?”

She eyed the still-impressive bulge in his shorts. “If I get an orgasm out of it, I’m game.”
Mentally, I slapped my palm against my forehand. In actuality, I ground my teeth. “You’ll be out of luck. Giving, at least in that respect, is not how he rolls.”

“How do you know?” Blondie interrupted.

“Yeah, do tell,” Santos added. “Did I miss something along the way? Did I stuff your stocking and neglect to eat your milk and cookies? Maybe we need a do-over.” He eyed me like I’d seriously ever give him a first time let alone a do-over.

“Never have I ever, and never will I ever,” I proclaimed. “I know of him. His reputation. We’ve run in the same circles for a long time.” A few centuries too long, but who was counting?
Blondie’s focus shifted to my outfit. “Why are you wearing so many clothes?”

“Yeah,” Santos said, “you should take them off. Unwrap that present for me.”

Blondie giggled. I glared at her. “Do you even realize that he’s flirting with me?”

She shrugged. “He flirts with everyone. And everything he says makes Christmas sound so dirty.” There she went, staring at his candy cane again.

I bent and grabbed a sheer wrap and tossed it at her before slapping Santos’s leg. “Time to go, Father Christmas. You’re under my protection now.”

He groaned. “You aren’t seriously still doing that whole saving souls gig, are you, Des?”

“As you well know,” I retorted, “since you’ve been dodging me for days now.”

“Sugar plum, if I’d known you were chasing me, I would have slowed my sleigh so you could have a ride.”

“Don’t fucking call me that.”

He waggled his eyebrows. “Should I call you Mrs. Claus instead?”

“Don’t ever fucking call me that.”

The jerk had the gall to laugh at my obvious indignation.

“Do you ever stop?” I demanded.

He rolled his hips again. “Wanna climb my North Pole and find out?” 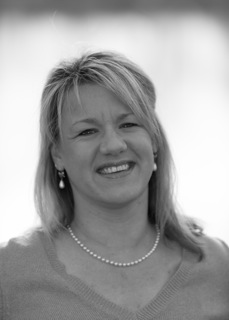 About the Author:
Tami Lund—author, wine drinker, award winner. Lover of romance. Writing happily ever afters, one book at a time.
Those happy endings come in contemporary and paranormal, so pick your poison. Or try them all. You’re bound to find something that curls your toes and makes you smile. 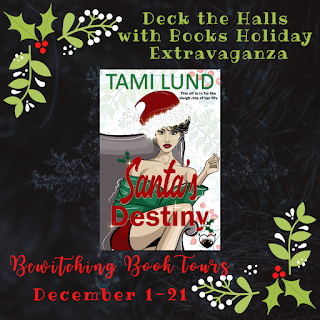 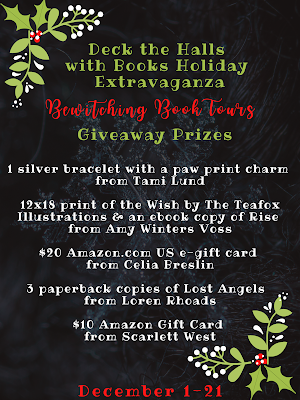 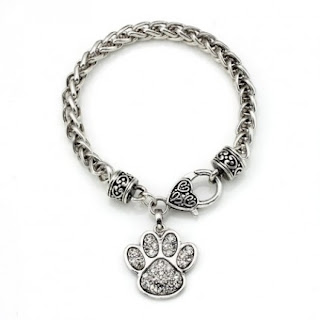 a Rafflecopter giveaway
at December 15, 2021