Journeys: the Archers of Saint Sebastian 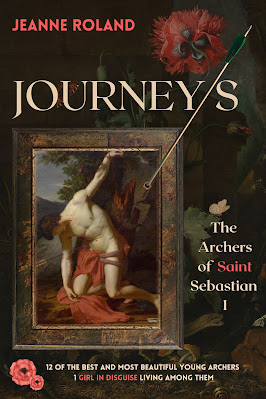 A barracks full of beautiful boys. A girl in disguise, living among them.

It’s the 14th century, and the longbow is king. But in the northern European principality of Ardennes, archery isn’t just the nation’s defense. It’s the national obsession.

12 young Journeyman archers, the best in the country

2 years of public competitions, in which looks count almost as much as ability

6 will win a coveted membership in the Archers’ Guild of St. Sebastian

1 will become the prince’s new Guardsman

15-year-old Marieke is as obsessed with St. Sebastian’s as everyone else in Ardennes. Only it’s the middle ages, and girls just don’t become elite archers. Except Marieke's prospects as a girl aren't promising either, after a well-timed kick from a mule has left her with a face that’s badly scarred and ruined for marriage. But when circumstances force her to leave her old life behind and flee to the guild for refuge, there are only two things Marieke really knows about the place. One is that a mysterious accident ended her own father’s time as a Journey. The other?

There are no women allowed inside St. Sebastian’s.

Marieke knows disguising herself as a boy and infiltrating the guild means embarking on a dangerous deception. But it may be her only chance to find out the truth about her father’s past and to stop a murderous plot from coming to fruition. When the dashing young Journeyman Tristan takes her under his wing as his squire, she’s got to stay – at least long enough to help him beat out his brutal arch-rival to win the competitions.

Keeping her identity a secret will be hard. Living in close quarters with a pack of gorgeous boys? That will be harder still. But the hardest thing of all will be keeping the vow she makes for herself: to see Tristan become the next Guardsman, without ever letting him find out she’s a girl - a girl, who loves him.

Part Robin Hood and part Princess Bride, with a pinch of Mulan and a dash of Cyrano de Bergerac in the mix, The Archers of St. Sebastian I: Journeys is a humorous action and adventure saga inspired by late medieval/early Renaissance Belgium and packed with romance, wit, and longbow archery. Perfect for young adults looking for an immersive read and for adults who love young adult themes, Journeys is an escape into the past that reads more like romantic historical fantasy than pure historical fiction.

Unrequited love? Ugly heroines who stay ugly? Friendship, coming of age, romance, adventure, and plenty of archery competitions? A unique setting inspired by the glorious city of Bruges, with a richly imagined world set within the walls of a male-only archers' guild? Journeys: The Archers of Saint Sebastian has it all, so if you're looking for a great escape, don your disguise and join Marieke as she enters the forbidden world of Saint Sebastian's, and prepare to fall in love with the Journeys - that is, the twelve best and most beautiful archers in all of Ardennes, the Journeyman archers of St. Sebastian's.

(Context: 15-year-old Marieke is disguised as Marek, and she’s serving as a squire to the Journeyman archer Tristan at the archers’ guild of Saint Sebastian. She’s in love with him, but she’s sworn an oath never to let him find out she’s a girl. In this scene, after Tristan and Marieke find an abandoned windmill, and spend an idyllic afternoon daydreaming in its shadow).

“Do you know what I love about you, Marek?” he says. At the word ‘love,’ the band around my chest constricts painfully, though he’s used it lightly enough. “You’re completely without pretense!”

If he only knew. I blush, not only at the compliment, but out of shame, too. But Tristan doesn’t notice. He rolls back onto his back.

“And, to stop acting?” I venture boldly.

“I firmly believe, Marek, a man has two choices,” he replies, crossing his arms behind his head and looking up at the sky. “He can stage his life as a comedy, or as a tragedy. Personally, I prefer comedy.”

“Very clever. But that’s not an answer. Besides, not even you can really laugh at everything.”

“Come on, Tristan,” I say, refusing to let him brush me off this time. “Give me a real answer.”

On impulse, I say, “Well, I know exactly who you are, Tristan.”

“You’re the next member of the Black Guards, if I have anything to say about it.” And I mean it. I resolve right then and there that I’m going to find a way to make it happen. 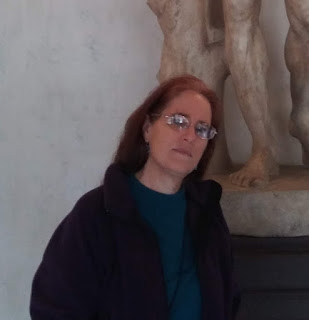 Roland hails from Davis, California, where she spent most of her youth lounging at the pool, soaking up the sun, and daydreaming. She had a key ring that read 'I’m running away to join the circus,' and her favorite moment of the day was when the local movie theater went dark, and the slogan 'escape to the movies' appeared on the screen. As an adult, her passions include all things melodramatic and beautiful — everything from classic movies, British romantic poetry, ancient tragedy and epic, to Italian opera. She is now a professor of Classics in a small midwestern town, where she lives with her Greek husband, her fraternal twins, and a Bernese mountain dog named Franco Corelli.

I blog as the Allegorical Traveler about Greek mythology at www.nepenthepress.com

I’m not a big social media person; the best ways to reach me are via my website or Facebook

Jeanne Roland will be awarding a $40 Amazon/BN GC to a randomly drawn winner via rafflecopter during the tour.

a Rafflecopter giveaway
at December 29, 2021