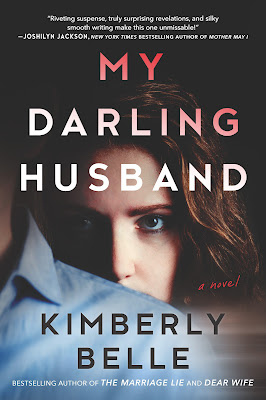 Bestselling author of DEAR WIFE and THE MARRIAGE LIE, Kimberly Belle returns with her most heart-pounding thriller to date, as a masked home invader reveals the cracks in a marriage.

Jade and Cam Lasky are by all accounts a happily married couple with two adorable kids, a spacious home and a rapidly growing restaurant business. But their world is tipped upside down when Jade is confronted by a masked home invader. As Cam scrambles to gather the ransom money, Jade starts to wonder if they’re as financially secure as their lifestyle suggests, and what other secrets her husband is keeping from her.
Cam may be a good father, a celebrity chef and a darling husband, but there’s another side he’s kept hidden from Jade that has put their family in danger. Unbeknownst to Cam and Jade, the home invader has been watching them and is about to turn their family secrets into a public scandal.
With riveting twists and a breakneck pace, My Darling Husband is an utterly compelling thriller that once again showcases Kimberly Belle's exceptional talent for domestic suspense.

Momma Says: 4 stars⭐⭐⭐⭐
Domestic thrillers can go either way for me, so I never know how I'm gonna feel about one - some wow me, some bore me, and some land me somewhere in the middle. My Darling Husband definitely landed in wow territory. This was one seriously intense book, and its twists and turns kept me on the edge of my seat. Of course, domestic thrillers/suspense tend to rely heavily on secrets, but Kimberly Belle takes that to a whole new level. The book is well-written, fast-paced, and almost impossible to look away from even for a few minutes - and that's all you're getting from me so I don't give anything away. If you enjoy tension-filled thrillers, this is one to read.

I see the black figure in the shadows, and my first thought is of the kids, an immediate, full-throttle alarm that comes on like a freight train. This is parenthood in a nutshell: utter terror for your children’s welfare, always. It’s something Cam and I never thought about back when we were trying to get pregnant—the overwhelming insecurity when the doctor settled our babies into our arms, the unrelenting worry whenever they’re not near. I spot movement and I reach for them at the same time—instant and instinctual. My brain identifies a person, a male-sized form that does not belong here, and I shove their little bodies behind mine.

A man, looming in my garage. Breathing the same air.

I don’t move. I can’t. No fight. No flight. I just stand here, transfixed, dumbstruck, stock-still.

I think of my phone, buried under the mail and trash in my bag. I think of the panic button on the alarm pad in the house, on the other end of a breezeway and tucked safely behind a locked door. I think of my keys, next to my phone. Even if I managed to get us out of this garage, where would we go? I’d never make it inside the house, and the backyard is fenced, the gates either electronic or secured with a complicated, child-safe latch. There’s nowhere to escape.

The voice is so frighteningly close. Hoarse, rattling in air hot with my sticky fear, and I don’t believe a single word. Especially not when he steps closer, and I get a better look. The man is wearing a mask. He’s holding a gun, a stubby black thing in a fist. Head-to-toe black, every bit of him covered, even his hands. His fingertips.

Run. I scream the word in my head, urging myself on. Grab the children and run.

A chill races down my spine. The hairs soldier on my skin.

This man is here to hurt me. To hurt us.

And still I can’t move.

So this is it, then. This is how my body responds when faced with sudden fright, with this hot, sluggish horror—like when your fingers brush over a strange lump under your armpit and you realize your life has veered sideways. Some people run. Others scream. Me, I just stand here, paralyzed by the mounting terror.

The kids, too. They stare at him with big, frightened eyes. A little hand grabs my pants leg.

“Please,” I somehow manage to squeak, but I can’t finish. Please don’t touch the children. Please don’t shoot us. The words are too horrifying to say out loud.

He moves closer, his gait smooth but there’s something sinister in the way he’s walking across the concrete floor. He’s like an animal on the hunt, joints loose, ready to pounce. All dangerous, coiled energy lurking just below the surface.

“Take my car.” I hold out my bag, a stupidly expensive designer thing from a couple years ago. “The keys are in here somewhere, and so’s my wallet. I—”

“I don’t want your purse. Don’t want your car, either.” His voice is deep and scratchy, the kind that sounds filled with cigarette smoke.

My stomach spirals, and I search his face for more, but the parts of him I can see—his lips, his eyes—are closed off. I search for something recognizable, something human I can appeal to, but there’s nothing. It’s like searching for meaning on a covered canvas.

Still, I take in every detail I can see and commit them to memory. Just under six foot, medium build, broad shouldered. Caucasian. I know this from his eyes, olive green and flecked with amber, the pink patch of skin around his mouth. His teeth are white and straight, the kind of straight that comes from braces.

My name on his tongue tightens a knot of panic in my gut, and I scurry—finally—backwards, putting some distance between me and this man, pushing the kids behind me and towards the door. 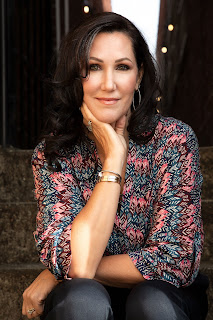 Kimberly Belle is the USA Today and internationally bestselling author of seven novels, including her latest, My Darling Husband (December 2021). Her third novel, The Marriage Lie, was a semifinalist in the 2017 Goodreads Choice Awards for Best Mystery & Thriller, and a #1 e-book bestseller in the UK and Italy. She’s sold rights to her books in a dozen languages as well as film and television options. A graduate of Agnes Scott College, Belle divides her time between Atlanta and Amsterdam.