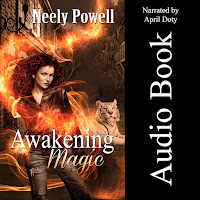 Awakening Magic
The Witches of New Mourne
Book One
Neely Powell
Genre: Paranormal Romance
Publisher: Findaway Voices
Date of Publication: 2020
ISBN: 978-166-4926707
ASIN: BO8PPTZ2CJ
Number of pages: 332
Word Count: 65,001
Cover Artist: Debbie Taylor
Book Description:
An enchanted town. A vengeful spirit. A powerful coven under siege. For generations the Connelly witches made a great sacrifice to protect their town. In exchange, New Mourne remained a refuge for humans and supernatural beings to live in peace.
Now Brenna Burns, or another chosen female of this generation, is next in line to die—unless Brenna can find a way to end the curse of the malevolent Woman in White. With coven protections breached, Sheriff Jake Tyler joins the battle. The witch and the shapeshifter search for answers to break the curse, becoming closer every day. Passion overrules reluctance as their romance intensifies. But how can love grow when murder and violence threaten their world? The time for sacrifice draws near.
The powers of the Connelly witches may not be enough to defeat the dark magic that holds New Mourne. As the demonic influence drains the small town of its peace, the coven struggles to break its deadly bargain with the Woman in White.
Chirp    Audible    Google Play    Authors Direct    Amazon

Connelly land had been stained by death But Brenna was determined to vanquish any trace of dark magic from this sacred clearing. “You’ll not take this from me.”

She wanted the Woman in White to appear and answer her. She wanted to challenge the spirit’s right to inflict misery on her family yet again. The only response was the sudden, sharp screech of an owl.

Brenna learned as a child that barn owls didn’t hoot. Their call was shrill, almost a scream.

“You feel it, don’t you?” she said to the bird. “This beautiful place is soiled.”

The owl fell silent as Brenna set up her candles at five points. With a flick of her wrist they flamed to life. Then she shed her clothes and shoes. Skyclad, she lifted her hands, palms up, and chanted, “Dirt from the earth, wind through the trees, water to cleanse, salt to set free. Banish the evil, honor my plea. As I will, so mote it be.”

She poured salt and water in a wide circle and repeated the cleansing spell. The calm and beauty of her family’s land pushed against the darkness. The owl called out another warning.

Brenna opened her eyes and locked gazes with a white tiger. Huge. Predatory. Standing like a statue just beyond her charmed circle. His tongue flicked around his mouth and displayed gleaming, sharp teeth.

Brenna expelled a deep breath. “God, shifter, you scared me.” 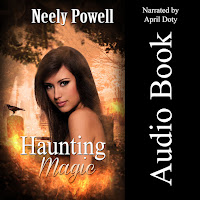 Haunting Magic
The Witches of New Mourne
Book Two
Neely Powell
Genre: Paranormal romance
Publisher: Findaway Voices
Date of Publication: 2/15/2021
ISBN:  978-166-9617143
Number of pages: 286
Word Count: 55,000
Cover Artist: Debbie Taylor
Book Description:
Fiona Burns, a witch who sees dead people, meets Hollywood producer Bailey Powers, who sees her as the next cable star—and a fake. Even so, she’s tempted by the dynamic producer in more ways than one. But she has a big distraction—a vicious curse on her family coven. The ghosts of New Mourne warn of the return of the Woman in White, a vengeful spirit who claims the life of a Connelly witch from every generation.
During the battle, Fiona unwittingly fuels the demonic forces, and black magic brings death and heartbreak to her family. Initially a skeptic, Bailey is soon caught up in her supernatural battle with forces of evil. He’s also beginning to think Fiona can help him escape his haunting past.
With magic and mayhem at war and survival on the line, the Witches of New Mourne face a new challenge from their ancient foe. They discover that not all dark deeds are borne of the Woman but a demon who is bent on gaining the Woman’s powers for his own. Will another generation fall? Or does the curse end here?


Overgrown weeds covered the back of the cemetery. In the deepening gloom, Fiona stumbled over a stump. The baby’s screams filled her head. She had to help this child.

The grave markers in the back of the cemetery were the oldest ones. Some of them were so weathered it was impossible to read the names and dates on them.

When they reached the back corner, Fiona knelt. All she could hear was the baby’s cry. She dug through the weeds and scruff in front of her, ignoring the sting of thorns on her hands.

Bailey dug with her, and soon she touched the cool stone of a broken grave marker.

“Baby MacCuindliss” was carved in uneven letters deep in the stone.

“This is the Woman in White’s baby.” Fiona traced the name on the marker with tender fingers. “Please don’t cry,” she whispered. “I’ll try to find your mother, I promise.”

The baby’s cry faded to a whimper. The mist blew away, leaving Fiona and Bailey under a canopy of threatening clouds.

Lightning streaked over the mountains, and the ominous stink of sulfur infused the air. 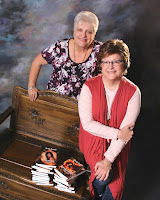 About the Authors:
Leigh Neely and Jan Hamilton Powell are the writing team of Neely Powell. They met working at a rock ‘n roll radio station, discovered they’d both rather be writing fiction, and have been close friends ever since. Their path to cowriting paranormal romance took some detours. Leigh’s resume chronicles a diverse career as a disk jockey, newspaper reporter, advertising copywriter, magazine writer and editor.
Jan wrote 24 romance novels as Celeste Hamilton for Silhouette and Avon Books and then built a career in corporate communications and public relations.
Neely Powell became a successful team when they turned their attention to shifters, werewolves, witches, ghosts, fae and all things supernatural. Their first novel was TRUE NATURE from The Wild Rose Press, followed by AWAKENING MAGIC, HAUNTING MAGIC, and HEALING MAGIC.
Their rules for maintaining a partnership are simple:  be honest, be kind, and bring Diet Coke and chocolate.
https://twitter.com/NeelyPowell3
http://www.neelypowellauthor.com/
https://www.instagram.com/neely.powell/
https://www.tiktok.com/@neelypowell
https://www.facebook.com/NeelyPowellAuthor
https://www.goodreads.com/goodreadscomneelypowell 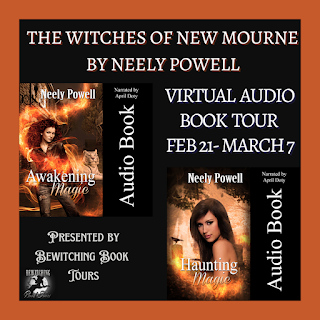 a Rafflecopter giveaway
at February 21, 2022