✱✱Book Review✱✱ Blog Blitz: I'm So (Not) Over You by Kosoko Jackson 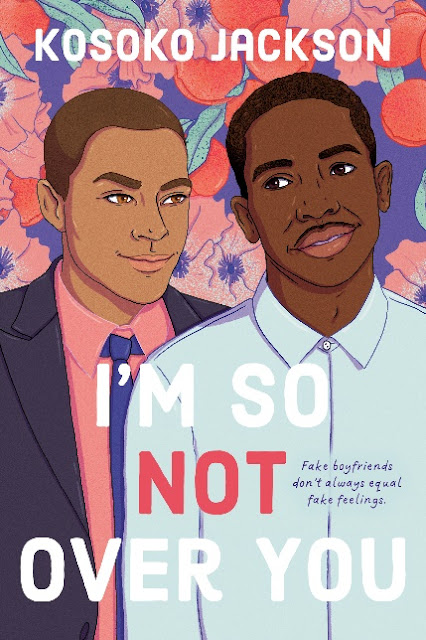 A chance to rewrite their ending is worth the risk in this swoony romantic comedy from Kosoko Jackson.

It’s been months since aspiring journalist Kian Andrews has heard from his ex-boyfriend, Hudson Rivers, but an urgent text has them meeting at a café. Maybe Hudson wants to profusely apologize for the breakup. Or confess his undying love. . . But no, Hudson has a favor to ask—he wants Kian to pretend to be his boyfriend while his parents are in town, and Kian reluctantly agrees.

The dinner doesn’t go exactly as planned, and suddenly Kian is Hudson’s plus one to Georgia’s wedding of the season. Hudson comes from a wealthy family where reputation is everything, and he really can’t afford another mistake. If Kian goes, he’ll help Hudson preserve appearances and get the opportunity to rub shoulders with some of the biggest names in media. This could be the big career break Kian needs.

But their fake relationship is starting to feel like it might be more than a means to an end, and it’s time for both men to fact-check their feelings.

Momma Says: 4 stars⭐⭐⭐⭐
I'm So (Not) Over You is a second chance romance by way of a bit of fake dating, which was an interesting way to go about getting that second chance. There's a lot of good representation here, which is a nice touch. That said, it's all about the story for me. If I like characters (I do!), enjoy their journey (I did!), and in this case, find a few laughs along the way (Again, I did!), then it's a winner. Needless to say, this one is. It does rely a bit heavily on miscommunication as a means of relationship angst, which is not my favorite, but it works for these characters. The story moves at a good pace, and these characters are so easy to like, and I may have laughed out loud a few times as they moved from exes to fake boyfriends to something more. This is my first time reading a book by Kosoko Jackson, but it won't be my last. I thoroughly enjoyed his writing style and wit.

The first rule, and only rule, of getting over your ex is not to answer your ex's messages. This can be done in many different ways, depending on the person.

One, change his contact to read: DO NOT ANSWER.

Three, glue a horrible weave to your scalp, so you look and act like a completely different person.

Four, restart your life as the owner of a mom-and-pop shop in rural Indiana and call it a day. That's one I'm particularly partial to.

All of those are good and valid options. Do what you need to do-no judgment.

And yet, somehow I found a way to break this simple rule. Not just break it, burst it wide open. Shatter it, if you will.

Because it's one thing to open a text and answer it, but it's another to decide to follow through with your ex's request.

Look up Bad Idea on Google, and our helpful search engine will bring up, Did you mean: Kian Andrews's choices whenever they involve Hudson Rivers?

My phone in my pocket vibrates once. My heart skips a beat. Maybe Hudson will cancel. Or maybe he'll realize the past three months apart have been a mistake and he's going to confess he's still madly in love with me? Maybe . . .

DIVYA EVANS: Let the record show this is a horrible idea.

"Of course you'd say that," I mutter, forgetting she can't, you know, hear me. And she may be right, but that's not the point.

When I got the text from Hudson a week ago, asking me to meet him at the Watering Hole, Divya was not amused. She scrunched her nose, like she tasted something rancid in the air, which wasn't entirely off.

Because to her, that's exactly what my relationship with Hudson was: rancid. Which, sure, everyone says that about their ex because it makes them feel better.

DIVYA EVANS: And yet, you still refuse to listen. Remind me, who is getting their law degree from Harvard?

DIVYA EVANS: But seriously, K. This is a bad idea. Closure is not as good as you think it is.

As a lawyer-in-training, she should understand why I need to meet with Hudson: to process what happened, to close that chapter of my life, and to seal it shut with a glue made of truth. The memory of us breaking up is an open wound that never healed. It was a volatile separation, ending with me blocking him on every social media account possible and drinking myself into a stupor that made the two weeks after the breakup a blur.

Maybe that's why Divya's a prosecutor and not a defense attorney.

Another vibration, another text.

DIVYA EVANS: I'm only a few blocks away if you need me.

KIAN ANDREWS: What are the chances of that happening?

Pretty high, if I'm being honest. Divya has always been my rock, no matter what. Whether keeping me from embarrassing myself when I started crying in the club two weeks after my breakup, making sure I got my worthless self out of bed so I didn't lose my partial scholarship, or even finding some men with absolute dump-truck asses to help me get over my head-over-heels obsession with Hudson, Divya has been that ride-or-die friend for me.

So it's reasonable to assume that when I'm about to go through another major, traumatizing Hudson experience, Divya Evans is the big guns I have on speed dial. What's that expression? Behind every great gay guy, there's a badass woman?

Again, my phone pings. I pull it out of my pocket without looking, expecting another (well-deserved) quippy barb from Divya. But instead, an e-mail stares back at me.

I stare at the screen for so long, the colorful background of one of the many lighthouses on the North Carolina coast. I want to savor this moment. Hold on to it, keep it in its box, and put it on the top shelf somewhere out of the way. When I'm a famous journalist, with sources sliding into my DMs, begging me to write Pulitzer-winning stories, and I'm giving a guest lecture at Northeastern, they'll ask me, How did you get started in this competitive, cutthroat business?

And I'll say, I got my first job at Spotlight. Will Spotlight be around twelve years from now? Probably not. News websites cannibalize themselves like bacteria. But it's the hottest place to work in journalism right now. Getting an Investigative Journalism Fellowship here would change my life. It's like . . . do not pass Go; instead, get Park Place on your second turn.

I tap the screen, bringing it back to life. Still, the e-mail alert taunts me. Maybe it's an interview request? Maybe my pitch on the lack of education programs in Appalachia and how it's setting students back several grade levels that I spent all last week making really did impress them, and they are going to offer me a position sight unseen. That's not unreasonable. It happens to white guys all the time. And I have good-no, fucking great credentials.

Like Divya says, they would be lucky to have me.

But at the same time, as my journalism professor said, Journalists are a dime a dozen. Why should they pick you over anyone else?

Which takes us back to Divya Evans, and her exact words: You're a goddamn star, Kian Andrews.

I wish I had the same level of confidence as her. I do a good job faking it when I'm around her, at least I think I do. But now? Alone in this cafŽ? Doing something stupid like waiting for the boy who broke my heart-who is now seven minutes late-and staring at the e-mail that could change my career? That confident facade is pushed far back into the closet; a place I haven't been since middle school.

And I promised I'd never go back there again.

Without overthinking it, I tap on the screen one more time, and then enter my passcode before I can change my mind. One more tap, and the e-mail fills the screen.

Thank you for your application for the Investigative Journalism Fellowship at Spotlight's Boston branch. At this time, we've decided-

There's no need to read any more. I could do a CTRL-F in my inbox, search for "we've decided," and bring up more than a dozen results. This is no different, despite how badly I want it to be different.

I'm halfway through a text to Divya, informing her about the rejection from Spotlight, which will undoubtedly result in her replying with drinks on me tonight, when a baritone clearing of a throat behind me causes my fingers to stop. The deep voice cuts through the low sensual tones of the Esperanza Spalding cover artist serenading us in the Watering Hole, even if it is as out of place as a Black guy in Boston-aka Me.

But the voice is unmistakable. Even after a year of avoiding everything related to Hudson, the way he speaks effortlessly from the depths of his diaphragm still sends shivers down my spine. And the way his boyish grin plays off his chiseled jaw makes me want to melt.

I do my best to turn slowly. Eagerness isn't a good look on anyone, especially around your ex when you're trying to act like you've moved on and are living your best single twentysomething life.

But my God does he look nice.

"Hey," he says while smirking. "Thanks for coming."