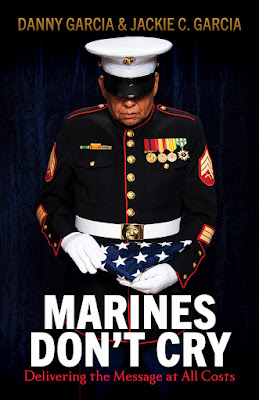 Have you ever been lost -- really lost?

Danny and Jackie answer this question in Marines Don’t Cry with stories of death to life, deep sorrow to joy, darkness to light, and freedom in Christ.

Danny recounts his early life in Spanish Harlem and describes conversion from a life of drugs and “the fast lane” to one consumed with knowing and serving God. This makes his journey of walking more than 52 million steps on six continents for children and world peace such an incredible story.

Marines Don’t Cry is about the transformational power of God’s love: how Danny found his calling and is delivering the message of Christ at all costs.

The next morning, the Palestinian officials picked me up, gave me food to eat, and took me to a hospital. They showed me some of the kids wounded by guns. The media interviewed me.

I told them, “I walk for these children who are in the crosshairs of conflict.”

After the hospital visit, they took me to a building I think was the headquarters of the Palestine Liberation Organization (PLO). Several people welcomed me, and I told them I was walking through Gaza for Palestinian children too. They thanked me, and some of them were weeping as they presented me with a medal on behalf of President Yassar Arafat and the Palestinian children.

I told the representatives where I was going, so the PLO assigned me a security detail of twenty men, ten on each side. The guards walked with me through the Gaza Strip, where I visited several refugee camps. The Palestinians were friendly and grateful that I was walking for their children. At the southern tip of the Gaza Strip, I reached the region of Rafah, which is mostly populated by refugees. Rafah’s border crossing, Egyptian-controlled, is the only means of crossing from the Gaza Strip into Egypt. Here, the Palestinian security detail left me. I was alone again.

That afternoon, I arrived in Rafah. As I walked through the streets of Rafah, I felt friction in the air. The tension was thick, hair-raising. I was alone with no escort or entourage. There was no American or UN presence.

The same day, Israeli forces had shot and killed a young Palestinian girl in Rafah. People were in the streets protesting at a heightened pitch. An angry mob of about 2,000 Palestinians saw me walking in the streets. Then three or four of them with rifles grabbed me by my arms. The men pulled me at gunpoint toward a one-story shell of a house.

“Who are you? What are you doing here?” they demanded.

The people in the mob saw everything. They yelled and fired their weapons in the air as if they were cheering my capture. We continued to move toward the building and, once inside, the men shoved me and threw me into a room. I was taken off-guard, dazed.

Then I realized that I was a captive. I had been taken hostage.

Perhaps it was three or four hours? As a hostage, I lost track of time. I relied on my Marine Corps training to survey my surroundings. I was frightened but knew not to show fear or panic. I had to appear calm.

I prayed silently, “Jesus, Jesus, Jesus. You brought me here, you order my every step. I trust you. Keep me calm, give me favor. Save me.”

My captors took my backpack and searched through my possessions. They found the silver medal with Arabic writing. They pulled the medal out of my pack like a treasure and held up it.

“What is this?” the captors asked.

Calmly, I said, “I walk for children, and I walk for Palestinian children. That medal was given to me this morning on behalf of Yasser Arafat, expressing his thanks for the walk I am doing for your children.”

Yasser Arafat was the Leader of the PLO. Because Mr. Arafat knew of me, the abductors realized they had to protect me, not kill me.

The men quickly repacked and zipped my pack and gave it back to me. They shuffled me from the holding area, took me outside, and threw me into a waiting taxi with my belongings on top of the car.

When the mob saw me being put into a taxi, they turned their attention toward me and ran, charging the taxi. They wanted vengeance to quench their anger at the death of one of their young daughters. They wanted to kill me.

The situation grew more chaotic, and my captors lost control. The bloodthirsty mob swarmed the car, screaming and beating with their fists on all sides. They rocked the taxi side to side, trying to overturn the car to get to me. Would I escape? Would I survive?

About the authors of Marines Don’t Cry 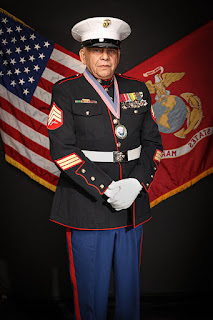 Danny Garcia, The Walking Man, was born and raised in New York’s Spanish Harlem.  He served as a United States Marine, law enforcement officer, and ordained minister.  Since 1996, he has prayed and walked over 52,000, 000 steps on six continents for children and world peace.  During his journeys, Garcia met with dignitaries all over the world, ministering to the famous and to the poorest of the poor.  Danny made presentations to Kings/royals, Presidents, and other world leaders, to include four Presidents of the USA, several Prime Ministers of other countries, the Pope, Mother Teresa, Ambassadors and various eminent personalities and multilateral organizations.  Garcia began his journey as a personal commitment to peace and children and continued walking and raising funds for multiple charitable organizations.

Danny is married to the former Jacqueline Charsagua of El Paso, TX, and they work side by side to share the gospel of Jesus Christ.  For more information, visit Danny’s website,  www.globalwalk.cc. 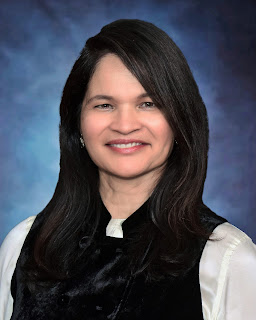 Jackie Charsagua Garcia is married to Daniel Garcia.  She graduated from the United States Air Force Academy in Colorado Springs, CO, in 1985 and was commissioned as a Second Lieutenant in the United States Air Force.  Jackie holds a Bachelor of Science in Management and a Master of Science in Human Resources Management.  While in the US Air Force, Jackie specialized in communications, acquisition, systems engineering, and information technology.

After a rewarding and fulfilling Air Force career, she retired as a Lieutenant Colonel in the summer of 2006, having spent more than 21 years on active duty.  Since 2006, she has supported and advised on all aspects of her husband’s walks and charitable initiatives within the United States and abroad.  She joined Danny during his Africa Walk in 2007 and ministered in South Africa, Uganda, Ethiopia, and Southern Sudan.  During this time, her faith and reliance on God grew tremendously under the mentorship of Danny Garcia. The Global Walk experience gave Jackie an opportunity to serve God abroad, and her vision is to spread the hope, love, and the grace of Jesus Christ through her writing.  She is a native of El Paso, TX, mother of one amazing daughter, and a breast cancer survivor.

YouTube link of an interview with Danny and Jackie for the Veterans History Project: https://youtu.be/tiJV0RdVmis

Ten randomly chosen winners via rafflecopter will win a free copy of the eBook.