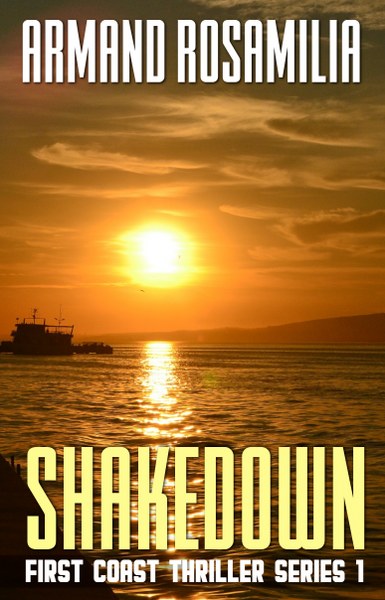 He's trying to work hard with a repo company, hooking cars and boats. Raise his daughter and stay friendly with his ex-wife. Make enough money to pay the rent on his tiny apartment over a bar in Jacksonville Beach.

But when one of the Orenato Cartel's speedboats gets repossessed, they come looking for it.

Putting Clayton, his family and friends, in danger.

Can he protect them, or will the cartel get what they came for? And will his own weaknesses get the best of him... again?

Walt knew he was in trouble as soon as the door slammed open.

He put his hand up to ward off the deadly rays of the sunlight behind the figure in his doorway.

“Get up.” The unmistakable voice of his boss. As soon as he stepped inside, Walt saw he wasn’t alone. It was Tommy, who he’d closed the bar with last night.

Good old dependable Tommy, who Walt had known since they were kids.

Walt sat up on the couch and looked for his pants on the floor but couldn’t find them. He must’ve passed out on the couch instead of crawling to his bed last night. It was all a blur. “Can we, uh, shut the door and put on a light? It’s too bright and it’s really hot.” After a second of failing to find where he’d tossed his clothes last night, he gave up. He reached for his smokes but his boss shook his head.

They still hadn’t closed the door. Walt closed his eyes and yawned. He was trying to act casual, as if nothing was wrong. Hell, he didn’t know what was wrong.

It hit him a second before he saw the boss give a nod to Tommy, who frowned but put his hand on his waistband. An inch from his weapon.

“Six of the cigarette boats were repossessed last night,” the boss said quietly. The man never yelled, even when something importantly tragic had occurred. Behind his back, the crew called him Jake the Snake, after the famous wrestler who never screamed and shouted when doing a promo before a match. Calm, cool and collected. Like a snake.

Walt nodded. “That was the plan.” The half dozen speedboats were registered to a fictitious name and they’d been useful for the past few weeks. But rumor had it one of them had been spotted by the Coast Guard, so now they weren’t worth the headache of wondering when they’d be confiscated. The boss thought up a novel idea: buy used boats up and down the southeast using offshore bank accounts, laundering the money as they did it. Then never make a payment and have the boat repo’d. With dozens of boats purchased each month and used to haul their product, the paperwork alone trying to find the purchaser tied up the system.

One of the crew, Mort, had questioned the approach not too long ago. Walt thought he was either high or drunk or likely both. “Why not buy the boats outright and launder more money? Then we torch the boats offshore and move on. No fingerprints, no problems, no way for them to be traced.”

Mort was gone the next day. No one questioned the boss about the boats again.

“I entrusted you to wipe down the boats and make sure there was nothing left,” the boss said.

Walt nodded his head. “I did it. Just like you said.” Now he was really uncomfortable. Had he finished the job before he’d gone out with Tommy last night? It was a bit of a blur. He remembered a hooker or maybe someone’s sister stopping by. Was that last night? Walt shook his head. He started to stand but the boss put a hand out to keep him on the couch.

“Do you know what happens when you mess up? It makes all of us look bad, especially me. Do you know why?” The boss smiled but it wasn’t pleasant.

“Because you put everyone in jeopardy?” Walt asked. He thought he should know the answer to the question but his head was jumbled with so many thoughts.

The boss stared at Walt for an uncomfortable minute, until Walt looked down at his feet. “I did what you asked. I wiped down all the boats and left them where you told me to leave them.”

“Then hand it over,” the boss said.

Walt looked up, confused. “What?”

The boss put his hand out. “The fifty pounds missing.”

“What?” Walt was sweating. The sunlight was still drilling into his brain and when he moved to put Tommy between him and the sun, Tommy sighed and stepped off to the side. Walt noticed his buddy had his weapon out now, too.

“They’re all marked, so I know what boat and where they were located inside the boat,” the boss said. He shook his head. To Walt, it looked like the boss was disappointed. You never wanted that. “Fifty pounds wrapped. Ten million dollars. Stashed under the cockpit sole.”

“If you’d been counting the packages like you’re supposed to, you would’ve known there was an extra package in one of the boats. This was a special request from a very important person, who looks the other way when our boats come into this area. It was your responsibility to make sure it wasn’t left carelessly. You’re on the hook.” The boss glanced at Tommy. “I knew you hadn’t found an extra bundle because you would’ve told Tommy last night.”

“I’m really sorry, boss. I swear it was an oversight. Give me another chance,” Walt said.

The boss shook his head. “This isn’t the first time you’ve been sloppy. I’ve given you enough chances. More than your three allotted strikes, too. While you and Tommy were out drinking, I lost millions of dollars on my watch. How does that make me look to my boss, who I have to answer to? Not good.”

Walt sat back down on the couch. “I’ll find the boat. It has to be stored somewhere local.”

The boss chuckled. “Not to worry. I have all of that figured out. No longer your problem, Walt.”

Walt smiled, thinking he’d get a second chance. The package was either already found, or the boss knew where it was. No harm. No foul.

The smile faded when Tommy stepped forward and Walt was looking down the barrel of a gun.

“I don’t suppose I can say anything to change your mind, boss?” Walt asked. He knew this was the end. He knew he had two options: smile in the face of death and lean into it with no regrets, or beg for mercy and cry like a baby.

Walt chose to cry like a baby. “I’ll do whatever you want, I swear, no more screw ups, I’ll clean toilets, I’ll kill for you free of charge, I’ll take out the garbage, anything, boss, anything.”

“You’re going to be a lesson to the rest of the crew,” the boss said. “I have to answer to a higher authority, Walt. I need to make sure this North Florida area is running smoothly. Without incident. Do you think I like giving the boats over to the authorities? No. If it was up to me, we’d burn them to the waterline. But…” The boss shrugged. “I do what needs to be done. No questions. No deviations. No part of the job can be sloppy or missed.”

“I can change. I screwed up, but I’ll work even harder,” Walt said.

The boss shook his head. “I wish I could believe you. Even if I could, your fate is out of my hands, Walt. You did this to yourself.”

As the boss left and shut the door behind him, the sunlight was gone. Walt could see.

See his friend Tommy as he pulled the trigger. 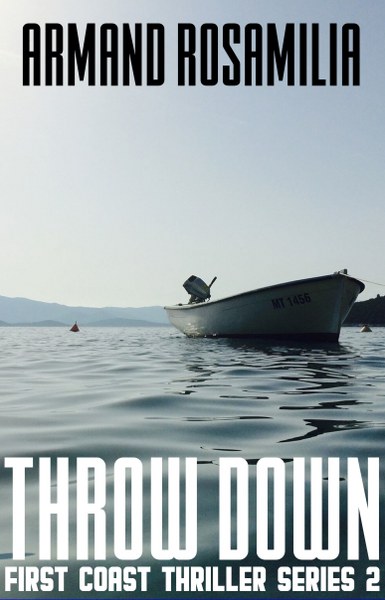 The sequel to Shake Down!

A bus station locker in south Florida is filled with drugs and over a million dollars in cash.

Clayton and his friends need it for their futures, but the Orenato Cartel wants it back.

Who will ultimately get the locker open and empty before time runs out? 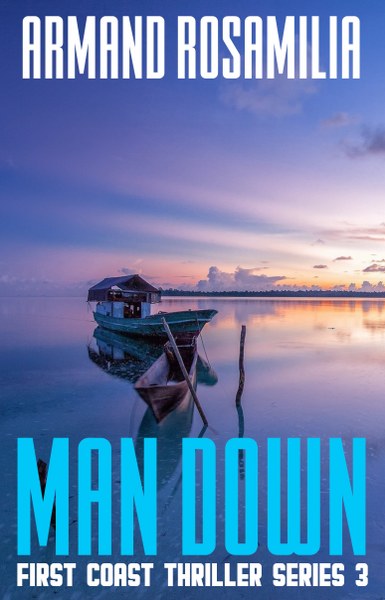 Clayton Conway and his coworkers are thrust into the middle of a perplexing case, when bodies begin to wash up behind the repo property. Is this the work of a maniac, or someone with a definite plan? 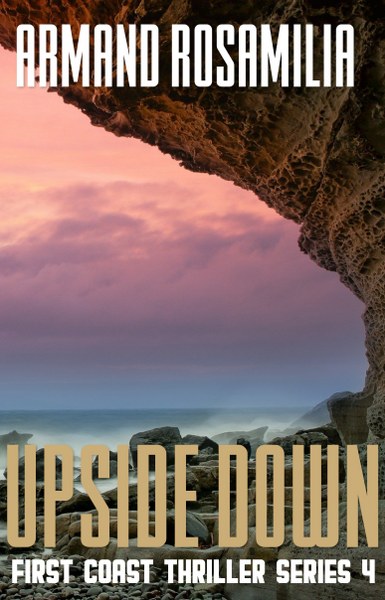 The action heats up in Jacksonville Beach!

Clayton Conway and the repo crew are faced with even more peril, both in their careers and personal lives

A woman is found, hidden in a secret compartment of a recovered boat, and looks to be tied to the Orenato Cartel. Is she a spy, or truly lost her memory? 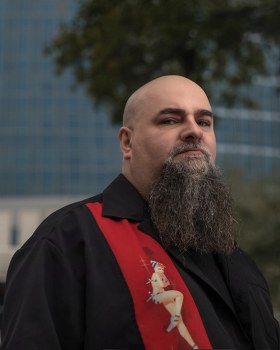 Armand Rosamilia is a New Jersey boy currently living in sunny Florida, where he writes when he's not sleeping. He's happily married to a woman who helps his career and is supportive, which is all he ever wanted in life...

He's written over 150 stories that are currently available, including horror, zombies, contemporary fiction, thrillers and more. His goal is to write a good story and not worry about genre labels.

He also loves to talk in third person... because he's really that cool.

You can find him at http://armandrosamilia.com for not only his latest releases but interviews and guest posts with other authors he likes!

and e-mail him to talk about zombies, baseball and Metal: armandrosamilia@gmail.com

A signed copy of the first Dirty Deeds crime thriller book (US only),