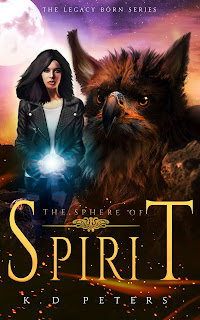 Sphere of Spirit
Legacy Born Series
Book One
KD Peters
Genre: Fantasy, YA
Date of Publication: 19th April
ISBN: 979-8438038238
ASIN: B09NM82M2F
Number of pages: 370
Word Count: 97 165
Cover Artist: Mars Dragon Designs
Tagline: The Sphere is an ultimate weapon to destroy a world and requires the sacrifice of ten magical kids. Nine are missing and novice fae, Sophie, is the tenth.
Book Description:
Seventeen-year-old Sophie Emerson struggles to keep her clairvoyance a secret. Seeing the future belongs to the Dark Ones.
But when Sophie’s visions display the nine missing kids from the village and place herself in the middle of it all, she has a choice to make.
Reveal her secret and suffer the consequences or end up being the missing segment of a weapon that will bring forth the apocalypse. 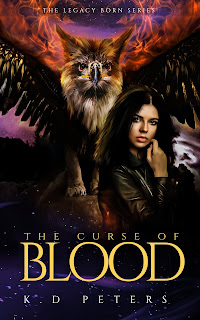 I dropped one foot back, whipped about, and powered along the path I’d come from. Tree trunks and thickets whizzed past me. Layers of dead leaves and twigs crunched underneath my feet.

I looked over my shoulder to see if he was following me. My foot struck a rotten log. I fell forward, hitting the ground. Pain seared through my palms and knees seconds before biting vines curled around my ankles. A shriek escaped my lips at the same time I got yanked off the ground. I hurtled towards the treetops.

Now the forest is attacking me!
The hauling came to a stop, and a burning sensation exploded from my ankles. Vines slithered around my calves and thighs like a snake, squeezing tighter. “Help!”

Moss slapped over my lips.

Eugh! Dirt spread over my tastebuds.

The vines squeezed harder. I couldn’t breathe. I kept squirming, refusing to give up getting back to my parents.

Drake’s footsteps stumped on the ground.

I rotated in the air and a guy with floppy dark golden hair and green eyes shored his leaning frame against the tree. He wore the same ops uniform as Drake.

“Drake didn’t kid when he said she was feisty.” A second man with a dark face and dreadlocks came closer as I grunted. He had the bluest eyes and a posh British accent.

“Aye, lose a lass, Drake?” Floppy asked with a drawl.

“I’m done.” Drake’s voice came from behind me. “If she wants to leave, let her leave.”

Hanging upside down, rotating slowly, Drake came into view, walking away with indistinct mumble following him. A migraine brewed, as all the blood flooded to my head. But it didn’t hurt as much as my ankles and body where the vines cut into my skin.

Laughter coming from both men reached my ears as I circled my way back to them.

“Get her down, Mav,” Dreadlocks said.

Mav lifted his hand, and the vines cutting into my skin retreated, slithering back to their proper places. I connected hard to the ground. An ache rushed up to my back and head.

“Oops, sorry.” Mav stood over me and smiled. His hand grabbed mine and hauled me to my feet.

A deep, roaring growl behind us shook my core.

The two men looked down the trail and back at each other. Mav lifted his hands again. Angry vines twirled around my wrists and feet, locking them tight against my body. I lost my balance. My eyes closed, ready for the impact, but it didn’t come.

When I opened my eyes, I hovered above the ground. My mouth instantly went dry, as my mind couldn’t process any of this. Drake’s footsteps neared, and then he jumped over my body and kept running.

“Let’s go!” Dreadlocks barked, and I flew behind him and Mav.

“What the hell is this?” Vines twirled around my face, covering my mouth. It tasted like dirty pencil shavings.

I grunted. These men are barbaric.

Trees flew past me as I sailed inches from the ground, barely missing the pine cones dotting the floor like spilled trinkets. I came to a stop.

Mav, Dreadlocks, and I took cover behind the thicket near the colossal tree where Drake hid.

Growling came from my left side. I turned my face and looked through an opening between two bushes.

A group of people wearing camouflage gear with massive black guns dangling from straps around their shoulders paraded the open area behind the thickets. They screamed secret organization and struggled to trap a colossal beast. The hair on my arms raised, and the suffocation pressed against my lungs as I stared at something that looked like a lion. It growled at the guys trying to hold on to the net. Enormous wings tried to flap free. Lions didn’t have wings, and they didn’t have ram horns either. What was that thing?

A tail tried to push itself free, and my eyes grew bigger.

“Pull harder on your end, McGregor. Be careful of the stinger.”

A giant scorpion stinger attached to the lion’s tail tangled itself in the net.

“The griffin is somewhere near. They are always together,” another yelled.

The griffin? The only griffin in my head belonged in a fantasy world.

“There are way too many agents,” Mav said.

“We can’t just leave Lindy. Where is Brooke?” Drake asked.

Who are Lindy and Brooke?

Drake grunted and swooped in my direction with his hands, ready to strangle me.

Drake jabbed a finger in my direction. “They wouldn’t have trapped Lindy if she stayed put.”

“Hey,” Dreadlocks said, keeping his eyes on the situation in front of us, “you were adamant about saving her life, remember?”

Drake grunted. “And how I regret that.”

“We need a diversion,” Mav said.

“Fine, I’ll create one,” Drake replied. “Don’t wait for me. Just get to the compound.”

He was ready to make a run for it when Dreadlocks pulled him back. “Be careful.”

About the Author:
KD Peters writes stories in multiple genres from Young Adult fantasy to rom-com romance. She loves paranormal romance stories, stories that she can connect with Young Adult Readers and might even have a contemporary romance or two in her.
She is currently working on two Young Adult series. Legacy Born Series and Beaumond Academy series. Both series are currently WIPs.
If KD isn’t writing, she is learning more about her craft or spend time with her children outdoor.
You can find out more about KD on her website at
https://www.kdpeters.com
https://twitter.com/KDPeters4
https://www.facebook.com/kdpetersauthor
https://www.instagram.com/k.dpetersauthor/
https://www.tiktok.com/@kdpetersauthor
https://www.bookbub.com/authors/kd-peters 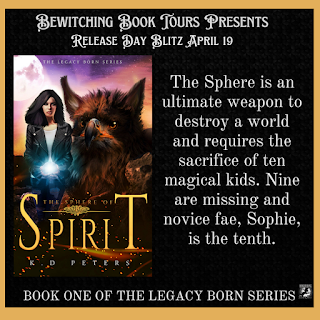