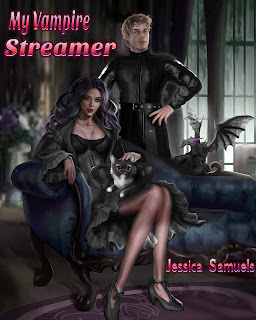 My Vampire Streamer
Vampire Witch
Book Three
Jessica Samuels
Genre: Paranormal Romance
Date of Publication: 03/19/2022
ISBN: 979-8436003078
ASIN: B09VZPKMQ8
Number of pages: 106
Word Count: 21107
Cover Artist: illustration by alex_gavrilas Lettering by CrimsonJolteon
Tagline: A good streamer saves a girl from an evil one!
Book Description:
Sophia Rivers was depressed until she turned to streaming and discovered her passion. Not everyone liked the fact that she was half vampire and half witch and when the evil Giles found out he wanted her for her blood. Along came Leon and he is the good streamer to save the day.
Join her as she discovers the good and bad communities that will show her how magical it is to be a witch streamer!
Amazon      Books2Read      KOBO      BN

Streams and streaming are life especially when you don’t have one. I like to keep to myself after my last breakup turned me sour. Being ghosted has to the worst feeling in the world. Despite the fact that I have a small online following I still felt alone. Sophia Rivers is my name, but my screen name is MysticWitch.

I stream potions, spells, and even do witch hauls to gather ingredients. I love getting in the kitchen to create a beautiful meal, and playing The Supernatural’s. Life sims are fun, especially ones that gather ingredients and grow crops. My black and purple hair is a cool part of my stream and I have gray eyes outlined in blue eyeshadow and always wear cat ears with corsets and leather. I loved the edge and style.

Once I started streaming I got the latest desktop with screens to see all the game, chat, and my streaming program. My apartment is nice sized with a living room, two bedrooms, two bathrooms, a kitchen, and a witch room aka a sunroom. I always get all my items from Witch emporium and I have a witch cupboard that keeps the best potions I need. I had it all till I felt like something was missing.

The last person I dated made me feel alone since he claimed he had issues and left without a trace making me wonder if I was good enough. Now I am stuck thinking of a plan to make my night less boring. But in hindsight my ass should have stayed home. It would be a lot less issues and drama, and I could have saved money, time, effort, and energy.

There are some people who shouldn’t have ever been allowed in my life in the first place. They wrecked everything and tried to run me down. Luckily, I got the help of The Killer Contract Agency and now joined the fight in good versus evil. Some groups are so evil they deserved to die especially after trying to use me.

I even have my pet cat shifter too with me. Ella Reed one of the cat shifters and guardian to the cat goddess Bast. She could see in the dark and had super-fast reflexes. She can land perfectly like a cat and retract her nails like claws. She was sitting down in a chair in the apartment we share together.

We live in the witches’ section and our coven the Witch Enlightening one. My powers are stronger than normal. I found her when I was drunk on the street and she was going through the trash, so I took her in.

She was beautiful in kitty form, a tuxedo cat black fur and white paws. Of course, in her human form she was gorgeous too. A pretty red haired and green-eyed beauty that made me look like a mess in comparison.

I literally look messy. My hair is everywhere and my eyes are puffy since I’m utterly depressed. I’ve never felt so ugly in my life like no one wants me. There are periods of me being alone and this aids my depression on a deeper level.

My mom was one of the high witches who paid for it all. She and dad who is one of the high vampires at court are my saving grace in this life. That is right I’m also more powerful than a normal witch due to being half vampire.

I sighed looking at the huge television in the living room and trying to watch whatever shit Ella put on. She was flipping the channels and then came onto the news Giles Black took home a trophy for best streamer and is celebrating in the Witch Haven bar. Omg. A bar I had access to only for elites.

This also reminds me of something I ached for since he had a small homey community. I was following him for a while, on Creature Stream and Creature Cord.

With creature stream you will be notified when your favorite streamer goes live. You can subscribe to them for special benefits and pics made for them like one streamer made an exclusive VIP place: in one of the bars just for him and his subs. You can even give them ghoul points as a way to cheer them on.

When you connected to Creature Cord you can get a special role to highlight how important you are to the community. I loved it and I watched streamers in between streaming. It was a nice way to connect with streamers and co-stream. It was also nice way to support your favorite streamers too. However, if I had known what he was about I should have avoided him. Instead, I didn't and paid the price in turn since they weren't white witches, but evil ones and I didn't know it.

Let's just say I should have stayed home especially since Giles was friends with the ex who used me and threw me away. Instead, I made the dumb decision of drinking more poison and turned to Ella and said, "Did you wanna go to Witch Haven?"

She nodded, "Yes since you haven't been out of the house in forever. I love going out."

“Yay! Hopefully, this will get me out of my funk.” I needed something to take my mind off things.

Break ups are the worst thing in the world. Witch Haven was a place I haven’t been to in a while, and what a perfect way to get over someone was with alcohol and getting under someone else. I can’t remember the last time I went there either. 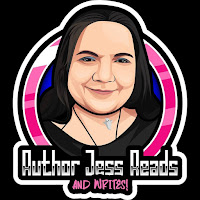 Jessica Samuels is an author who writes young adult and new adult paranormal romance. When she isn’t writing about vampires, werewolves, witches and angels she is watching stream, reading and playing video games with friends to pass the time.