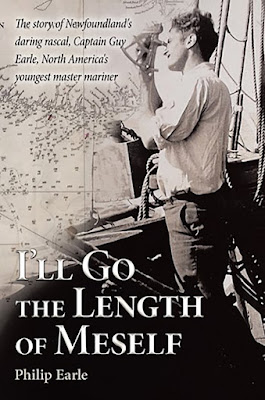 "Guy's life was a living adventure: he was a mariner and navigator of the first order, a character with the bravery of a Viking and the kindness of Robin Hood. Generous to a fault, he could never turn his back on someone in need, and would risk his life in a flash to save the life of another. He was like a godfather to the coastal people.

"Guy Earle commanded ships when he was a boy. He had the qualities admired by Newfoundlanders, and created maximum employment in the family business wherever he could. He was truly a Newfoundland hero."

"Guy had a mind of his own. He was a terrific leader and he played hard to win at anything he did. He was quick to size up a situation and quick to take action. He never, ever accepted the word 'can't'; if it was possible, it had to be done."

"Skipper Guy could take charge on anything. He had no fear and believed in himself. He could make friends with the Queen, as they say, if he wanted, and get anything he wanted."

"It must be a beautiful thing to know you saved someone's life. Guy Earle saved me. I've had a long life, a successful business, and raised a family because of him. He was a great man."

"Guy Earle was the exemplification of courage in everything he did. His trade was with people and his warmth spread as widely as his countless business negotiations. He gave his life to his vision of the fishery; it was his gift to his homeland, a gift few men can claim to better."

"Guy Earle was sent here by God to give to people."

"Captain Guy was a daring seafarer whose legendary adventures rivalled those of the heroes in such Hollywood films as Captain Blood, Down to The Sea in Ships, and Captains Courageous."

"There will never be another Guy Earle; there couldn't be."

Under full canvas in the bay, the Gorton reduced her sails as she entered the harbour. Everybody was waving their hands and caps at the schooner’s arrival and were proud of the young Carbonear crew for making it through the storm. Skipper Guy was on deck at the wheel and enjoyed the welcome they were given.

In response to the excitement and appreciation, he passed the wheel over to a crewman. He climbed up the rigging on the mainmast and stood up free on the crosstrees, waving to the people. He then swung out—seventy feet above the deck—with his hands holding onto the tight cable connecting the tops of her spars. From there, he went hand over hand, with his legs hanging down, halfway out the cable.

Then he did something unbelievable. He raised his feet up to the cable and hooked them around it, and slowly released his hands from the cable. He straightened out his body, as he lowered himself full length as he hung upside down! Everybody watching held their breath and went silent. No one had seen this before. Then someone noticed that the skipper was not hanging from the insteps of his feet but by the back of his heels! People were in disbelief.

The skipper stayed in this upside-down position for five minutes, until the boat went another thousand feet farther to Rorke’s coal wharf. He slowly raised his hands, grasped the cable, and released his feet, letting his body hang down upright. Then he swung hand over hand, monkey-like, the rest of the way to the foremast and climbed on the crosstrees. By this time, more people had gathered on the hill and along the bank to see the ship’s arrival. Not to disappoint those late arrivals who may have missed the daring high-wire act, Skipper Guy looked at the crowd and waved. Then he slowly turned towards the water, stood still for ten seconds, and dove seventy feet into the harbour.

My father lived an exhilarating life. With I’ll Go the Length of Meself, my hope is to showcase his legacy as a great mariner, businessman, humanitarian, and exhibitionist, along with many other attributes. There will never be another Guy Earle, there couldn’t be. This is his story, and I’m proud to share it.

WEBSITE - "There will never be another Guy Earle; there couldn’t be." (gothelength.com)

Dr. Philip Earle will be awarding a $15 Amazon or B/N GC to a randomly drawn winner via rafflecopter during the tour.