Rob’s current goal in life? Do not eat people. That’s easier said than done when you’re a kelpie in the service industry. While Rob pursues his goals from behind the bar, a stranger walks in, and Rob catches the man’s scent. Yet, patrons are not for eating, and it should have ended there… except when Rob smells that delicious scent again, the beautiful stranger needs help.

Bertrand wants to fit in, but because he’s part Fae, part Elf, and grew up human, he’s not really at home in either human or supernatural society. Still, he likes being a reporter and following a story all the way to its conclusion. The story he’s pursuing when he walks into Rob’s bar one night is one of supernaturals going missing, and Bertrand seems to be the only one who cares.

Meeting Bertrand might just shift Rob’s life goals. Coming face-to-face with a kelpie stallion might be enough to help Bertrand see where he fits in perfectly. Except Bertrand doesn’t really know what to make of Rob, and also, Bertrand's missing persons story is bigger than even he envisioned. It’s turning into a case of abduction and trafficking he needs to unravel before he can even think about Rob’s advances. The story will lead Bertrand to some dark places before the year is out.

In his more philanthropic youth, Rob had been excited about opening a bar-slash-diner and making a name for his establishment. He had succeeded with the Ragdoll, which was known for amazing sandwiches and exquisite liquor concoctions in supernatural circles and human circles alike. Going fully vegetarian had been the logical choice for Rob when he’d moved to the city of Fairview.

Now, he had over twenty years in the service industry under his belt, and the occasional slice of liver sounded so appealing when Rob had to cling on to his smile for all he was worth in front of a customer. It was why he’d hired a half-succubus and sexy Ilya whatever-he-was to handle the personal interactions.

(Rob was convinced Ilya could have, if he’d ever shown the inclination, charmed the pants off a barstool if barstools wore pants.) But now, with Ilya in love with a disgustingly rich witch and consequently out of town for whatever spell the Fey had planned to put on Rob’s most beloved employee, Rob had to pick up the slack behind the bar. And Ilya’s brother was not a suitable replacement, even if he was responding well to getting trained for the job.

“There is not enough rum in this,” the customer told Rob again, and Rob was pulled from his musings and back to wishing for a slice of liver.

“I’m ever so sorry,” Rob said without conviction. He looked up from the lime he was about to dismember on his cutting board behind the bar and glanced over the customer’s shoulder at Titi. The busboy was taking down the Fat Man Day decorations and prepping the Ragdoll for Sparklers and Public Drunkenness Day. There would be even more early drinkers here on Sparklers and Public Drunkenness Day, and Rob would have to be behind the bar, because sweet Ilya was getting bewitched.

“So are you gonna make me a new one?” the customer asked. Apparently, the red-faced man in his thirties with a beer belly threatening already was still there. At three in the afternoon. To consume rum cocktails. Not that Rob was the judgy type.

Rob had no intention of making another Mai Tai. He took a step to his right, located the dark rum, and poured the customer another finger of the liquor into his glass. “There you go,” Rob said, giving the man his best take it or leave it look.

The man looked from Rob to the cocktail, back again, and took it. He was complaining under his breath as he moved back to the table he’d occupied with two equally annoying male companions. The beer bellies were imminent in all of them, in Rob’s opinion. Sadly, that meant their livers would be fatty rather than yummy.

“Sorry,” Ilya’s brother said. Rob looked over to the man, who wore a black button-down shirt and jeans, but not as well as Ilya. He didn’t look half as sexy as Ilya. Rob still could not understand how that worked, how they were related. Ilya was a mysterious pale-skinned and raven-haired delight (who could easily handle over-drunk patrons with his charm). Kyle was plain dishwater blond. It made no sense, apart from being unfair to Rob, who would have loved nothing better than two Ilyas behind his bar.

Kyle narrowed his eyes and looked at the floor. “Okay.”

Rob frowned. Kyle was an odd one, but he followed direction perfectly. The real downside was simply that he wasn’t the sexy barman his brother was.

“Really, it’s okay. Some people just need to be assholes, and there is nothing you can do about that.” He patted Kyle on the shoulder. Kyle jerked a little at the contact before he relaxed.

Rob felt that was enough life advice, so he went back to murdering the lime. About five seconds later, the door opened, and on a breeze of cold air, the local mage and one of her lovers drifted into the bar. This lover (the nice one) was slightly too chatty for Rob’s taste, but judging by the time, the two of them were just here for a late lunch or coffee and something sweet. (This time, Rob hoped they wouldn’t have their… dessert in the ladies’ room. Rob wasn’t a prude by any means, he just disliked cleaning a bathroom after people spent time on their knees in there for whatever reason, and it was extra work, even if Kyle happily volunteered each time.)

Predictably, after the mage -- in conversation with the nice lover -- waved hello at Rob and Kyle, who seemed like he wanted to hide under the bar at seeing her, they made for a table rather than the bar. Rob knew Ilya, and possibly the Fey witch, had gotten the mage to become a regular, and it made Rob miss his night bartender all the more.

Kyle sidled up close to Rob. “Uhm, do you want me to serve them?” he asked quietly.

Rob put his knife down. This lime was getting lucky, for now. “I can do it. I don’t think she bites, and that lover definitely doesn’t.” 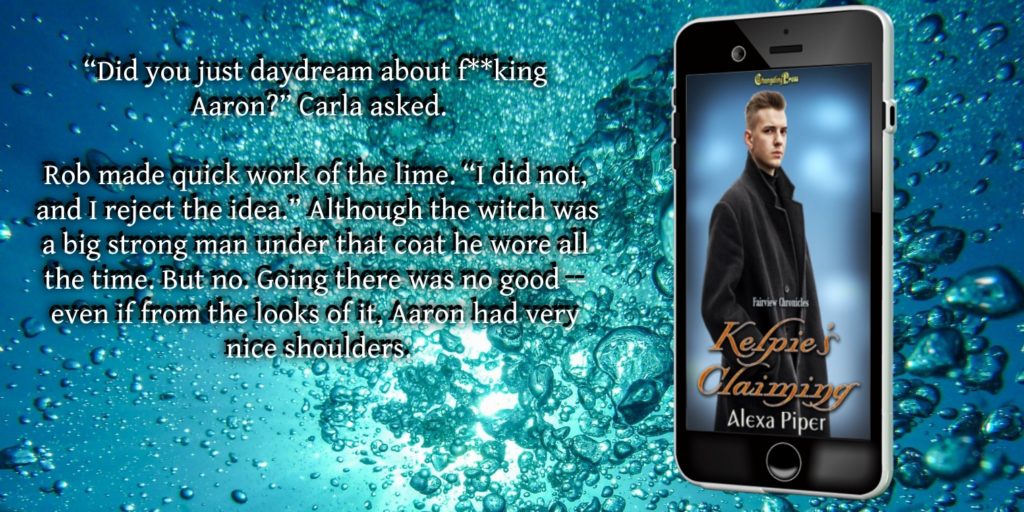