Thirsty: Monique has finally found a place where she can live out her fantasies. Little does she know the den of iniquity she's walked into is more than just a theme club. Omen's is the playground for every type of monster in the world.

A Thirst to Die For: When Nolan gives life to Amanda's carnal fantasies, his own life changes. Hell is coming to pay him a visit, and he's about to lose control.

Bane of Existence: One night spent in a human woman's arms brought Bane, a son of Satan, as close to heaven as he'll ever get. Now the only way he can have Iris is to convince her she wants him as much as he needs her.

A Vampire's Thirst: Once Nolan gave all souls moderation in everything. He was good at his job, and he called heaven home -- until he fucked the wrong seraphim! Now he's a vampire slayer serving the devil, keeping an eye on Omen's, and babysitting Lucifer's son. Not a job he expected to hold for damn near eight hundred years...

"Must be a cold day in hell. You haven't come here alone in ages. Losing your touch or what?"

Since Nolan had been asked to keep an eye on the club, and on the devilishly handsome man behind the bar, he almost never visited without someone to make his evening more exciting. Giving Omen's owner, Peris, a long, appraising look, Nolan's cock twitched in regret. He'd been too busy lately.

"You asking to be touched? 'Cause I can do that, and make you like it." Nolan sat on his normal stool at the end of the long, shiny wooden bar, and eyed too many empty tables. "Where is everyone?"

"Resting up from their wicked weekend. And you wouldn't know what to do with that cold dick up this hot ass."

The sound of the swinging door distracted them both.

God damn, the woman was striking. Tall, curvaceous, with dark brown hair to her ass. An ass that cried out to be fucked. Christ. Nolan's cock came alive. So did every other part of his body, which took a lot of doing, considering he'd been dead too many years to count.

Peris chuckled from the other side of the counter, giving his balls a noticeable squeeze. "Looks like a live one to me. I might make a play for her myself."

"Not unless you're looking forward to visiting relatives." Peris had connections to the hierarchy below, but with the dark one's permission, Nolan would send the young man to Hell in a heartbeat.

Nolan had been called lots of things -- dead, undead, bloodsucker, motherfucker -- and he lived up to every one of them. He was a Slayer, and he was the best. "Get the lady a beer. Let's see what she does with it."

Watching the woman make her way to the bar, he took a deep breath. Human. Omen's wasn't a place humans popped into often, and for good reason. The cloying feeling of imminent danger was prevalent, a vibe even the shallowest human sensed the minute they entered the establishment.

This one ignored it, so she must be looking for something. Or someone. The blood pulsing through her gorgeous body would soon be running through his veins. Wouldn't kill her. Vamps didn't do that anymore. Okay, some did, but they were the ones he took out of play, and he enjoyed every minute of it.

Peris delivered a cold brew and a glass and turned away, pretending to straighten the bottles of liquor on display. Nolan, adjusting his heightened vision, gazed right into her eyes when she looked his way. One hazel, one brown -- not something he saw often. Tipping the bottle toward him, she smiled and nodded before putting it to her lips. No glass! Excellent. A cock sucker, and he'd bet every year he had lived she was a good one. When her pink tongue darted through painted red lips, wrapped around the top of the bottle and licked it clean, he made his move.

Easing into her mind, he sifted through all the day's clutter. Such tiny panties. With a groan that lodged in his throat, he backed out, sniffing at the air. Sweet. What he'd unearthed in her mind made his dead heart beat like a drum. Fantasies should be played out, and he intended to help with hers. 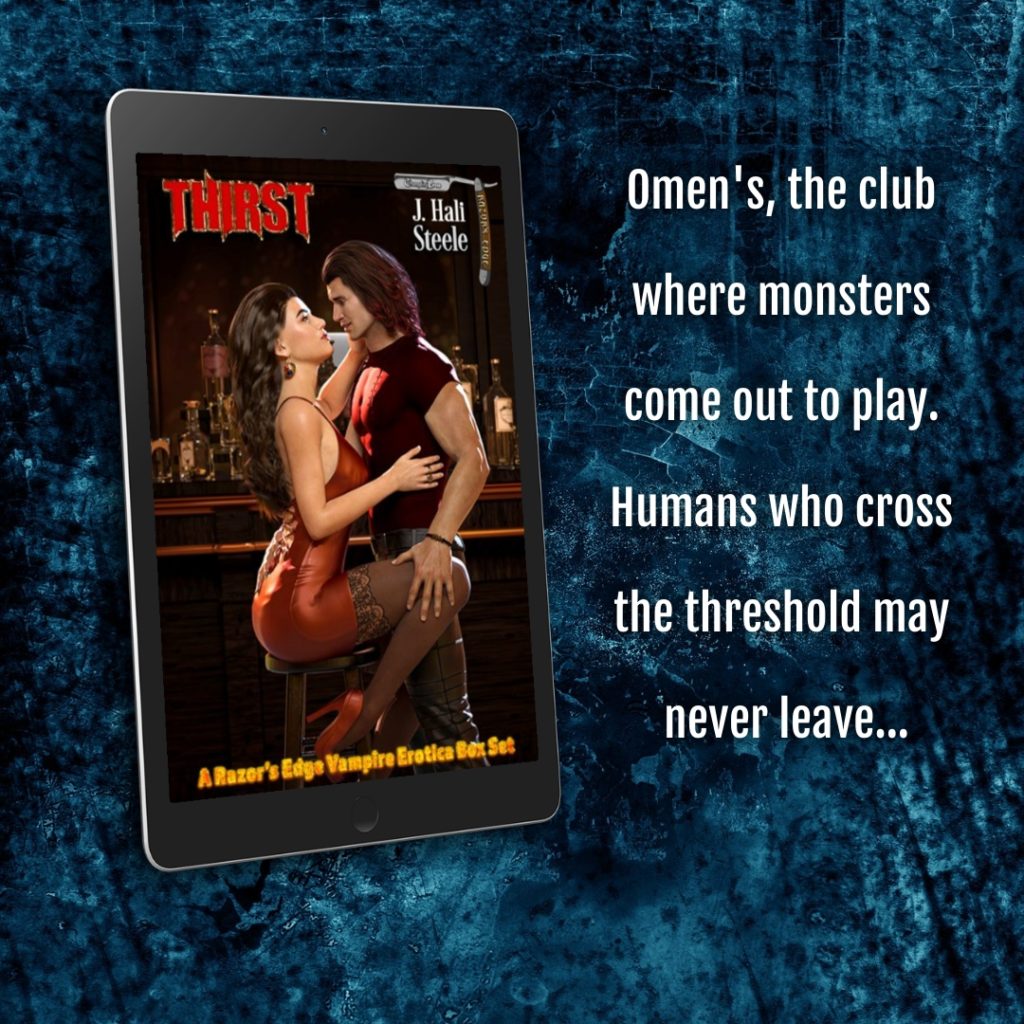 Multi-published and Amazon bestselling author of Romance in Paranormal, Fantasy, and Contemporary worlds which include ReligErotica and LGBTQ stories where humans, vampyres, shapeshifters and angels collide-they collide a lot! When J. Hali's not writing or reading, she can be found snuggled in front of the TV with a cat in her lap, and a cup of coffee.