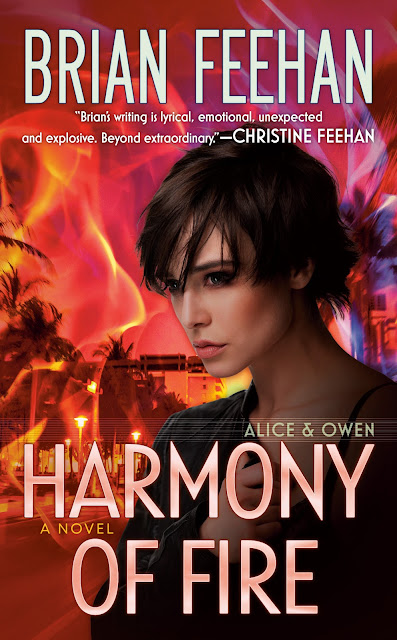 The We walk among us—beings who existed long before humans ever did, filled with powerful magic. Owen and Alice are both Etherealist, rare humans born with magic and a target for those We that wish to take it from them. At nine years old and against her will, Alice's soul was tied to one such powerful and evil We. She escaped and was trained as a weapon so she might one day break the bond and safely return home. Everything is going to plan until she meets Owen.

Owen is a musician who is trying to outrun his past while keeping those around him safe in an increasingly dangerous world. Owen keeps them on the move until a band of Hunters makes their discovery inevitable. Owen must go home, a place he swore never to return, and seek protection from the We who could destroy them. And then he meets Alice. Only through finding each other do either Alice or Owen have a chance of survival.

Momma Says: 4 stars⭐⭐⭐⭐
Harmony of Fire is the first book in a brand new series and a debut by author Brian Feehan. The story is paranormal romance and suspense set in a world of urban fantasy. Being a fan of all three, I was excited to get my hands on this one, and it does not disappoint. As this is the first in the series, there's a fair amount of introduction by way of world-building, which can go either way for me depending on how it's done. Here, it's a lot, but it never felt overdone to me. The story is exciting, and Brian Feehan's world is a place I want more of. The characters are interesting, and the romance, while a little slow to start, is one that's easy to root for. This first Alice & Owen book is a good combination of paranormal romantic suspense and urban fantasy and a pretty impressive debut. I'll be looking forward to whatever comes next for these characters, and I have a new author to add to my watch list. I realize I've been vague, but this is one to be enjoyed without spoilers. Just know that I recommend Harmony of Fire to anyone who likes paranormal romance and/or urban fantasy.

Warning bells flitted through Owen’s mind as a long, skinny arm wearing a simple black and gold leather watch knocked down hard on top of the bar. The clasp to the watch faced up, veins and tendons in the wrist creating lines and valleys for his eyes to follow.

“I need the stamp? Wait! What are you? What the hell are you? You’re not one of the owners? I don’t care. I need protection. Where is the owner?” His voice was fast, and drove in like a ram’s horns, twisting Owen’s gut.

The stranger’s hand reversed from pressing flat and open into a tightened fist, demanding satisfaction. Owen looked from the fist to the stranger’s face.

A sea of humans enjoying the music, atmosphere, or simply wanting drinks framed the new customer. Air in motion stilled as Owen looked, examined, studied. Owen made mental notes of the creature speaking, in case he ever might have a need to find him again.

Five foot eight, on the thin side, black hair parted to the left, wrinkles around the eyes, oval face, nose slightly long, not overly bulbous. Asian American, most likely. Well dressed, in a gray suit, open-collar white shirt, expensive material. Appearance ruffled, sweat around the rim of his hair.

Blue underglow shading just beneath the right eye, as well as along the right jawline. A level two and very frightened.

One of the creatures before earth. One of the We who had celebrated with God, before their choice between going to war, or staying here… One of the We.

Frightened always means deadly when it comes to the We. He doesn’t know who I am. I have to give him something he can hold on to. Be the bartender.

“Hello, sir. Aurei is one of the owners and she just went to the back. She will be out in a moment, and she can help you with what you are looking for. My name is Owen. How about while you wait, I get you a drink, something cold? You look thirsty.”

A patron to the We’s left spoke up. “Hey, I have been waiting for like ten minutes, and this guy just walks in here and you’re going to help him? This is bull. I have girls waiting on me. I was next.”

“Quiet, you fool!” the level two commanded, striking out by infusing his voice with ethereal energy.

Owen watched the wave of words fan out, slamming hard into the patron who had spoken like a blow to the throat. Instantly the patron’s windpipe closed, but the choking didn’t make a sound. The wave of spoken power rippled past like a stone in a pond, silencing those gathered nearest as well.

The power shattered against Owen’s own protection. Like the itch, the protection was a byproduct of ethereal energy stored within, and Owen had more than most.

I hate level twos. They don’t know their ass from their elbow.

Owen’s right hand moved out to the side, with the message Hold. I have this. A clear sign for both Clover and Jessie, who were looking his way.

The release of power in the air was like a foghorn going off to anyone with ethereal power inside the building.

Using the white cooler, Owen stepped up and in one smooth motion leaped over the bar, one hand touching the thick, polished wood for balance as he slipped himself into the small gap that had formed.

The maneuver created reactions but Owen ignored them all, focusing on the thin We with the specs and the human patron who could no longer breathe.

Excerpted from Harmony of Fire by Brian Feehan Copyright © 2022 by Brian Feehan. Excerpted by permission of Berkley. All rights reserved. No part of this excerpt may be reproduced or reprinted without permission in writing from the publisher.

Brian Feehan lives in his mind, creating vibrant characters who talk very loudly and far too often. When real life comes knocking, it is likely to be the love of his life, Michelle, or their son, Dylan. Together, the three of them live on the northern coast of California, which is far different than any other part of California. Learn more online at brianfeehanauthor.com.
at July 12, 2022