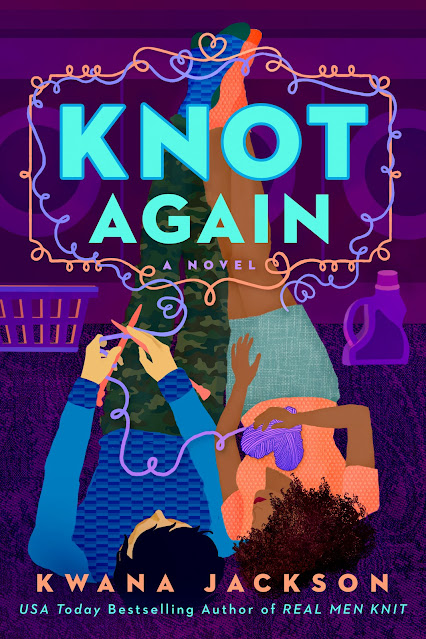 Sometimes fireman Lucas Strong feels like he can only find any peace and quiet at the local laundromat, where every day is rinse and repeat — until a fateful run-in with his high school crush.

Hoping to attract more customers to his family’s knitting shop, Lucas Strong participated in an FDNY charity calendar and accidentally became a local celebrity. The only place he can find solace is Scrubs—a 24/7 laundromat where he can disappear for a couple of hours. But Lucas’s soapy sanctuary is shaken by an inquisitive little girl with a late-night interest in knitting, whose mother is his old school crush.

Sydney Harris knows that Harlem is like any other small town, and everyone is probably whispering about how she left such a good man—and a good life—behind to wash and fold laundry by the pound. If only they knew the truth. But Sydney will always put her daughter’s happiness first, even if that means moving back to Harlem and facing her past.

What Sydney never expected was to see Lucas again. A long-forgotten attraction kicks into high gear as Lucas and Sydney start to spend time together at the laundromat, and they must decide if this is true love or just an infatuation, thin and fragile as a soap bubble.

Momma Says: 3 stars⭐⭐⭐
I'm a sucker for a second-chance romance, and when that second chance involves a sexy firefighter who knits - well, sign me up! Lucas and Sydney are likable characters, both separately and together, and Sydney was so relatable to me as a single mom. I remember too well what it was like trying to figure out who I was as a divorced, single mother. Like the first book in the series, Knot Again has a charm about it that just makes you smile. The only drawback for me was the way these two went back and forth. Of course, some angst is to be expected, and that back and forth is just part of it, I suppose. That aside, the story did hold my interest, and I look forward to whatever comes next for these brothers and the family knitting shop.

Sydney pulled her attention back to her work. She only had a cer­tain amount of time to get it all in. Mr. James’s load was on the next phase of the washing cycle, so it was back to the linens for her. Time to focus and get her attention away from the nighttime activities. Speaking of focusing . . . she turned and leaned to look back at the employees’ counter where Remi was— or should be. Where did she run off to? Remi knew she had to let Syd know if she was heading to the bathroom or upstairs. Syd looked around, her heart instantly beating a little faster, though she told herself to just stay calm.

“It’s so cool, mister. Your hands are moving so fast, I can barely keep up.”

Sydney swiveled her head toward the sound of her daughter’s voice coming from the far- right corner of the laundromat. Who was she talking to over in the waiting area at this time of night? Just a moment ago she was in the employee area coloring.

Sydney dropped the linens in the basket in front of her and stormed toward her daughter’s voice.

“Remi,” she started, her voice short even to her own ears, “who are you talking to over there?”

“Come look. It’s so cool, Mommy. He’s going so fast and said I could learn it easy.”

Sydney could only see the two of them from behind. The man wore a bucket cap, but his head was bent down toward his lap and her daughter sat, though not quite next to him, close enough to be considered next to him. Way too close. Not a full connected chair away, the space that separated them was, by Sydney’s measurement, not even a full arm’s length. Remi knew better. And the man— she didn’t care what he knew, just what he was gonna know.

It took all her restraint, and the fact that she knew she couldn’t make the jump, not to hurtle herself over the chairs, yank Remi back and drop- kick the guy in the bucket cap.

“What the hell’s going on here?” Syd spat out, rounding the chairs at the same time she reached out and pulled Remi harshly toward her.

Remi looked up with shock and fear in her big round eyes. Syd­ney didn’t blame her, but she didn’t have time to coddle her either.

Sydney looked down at the guy on the bench as he raised his head, bringing his dark eyes into view as they met hers with a bold challenge. It was Sydney’s turn to be shocked. Emotion flipped and doubled back onto her as it seemed to physically hit her in the chest.

Remi continued to point. “We were talking about his knitting, Mommy. Isn’t it cool? I want to learn too.”

He cocked his head to the side then, the movement so familiar Sydney found herself mirroring it. “Yeah, Syd, we were talking about my knitting,” he said. His voice was the same, but deeper now. More manly, with a raspy edge that hadn’t been there when they were younger and that she strangely hadn’t fully grasped over their video call. But then he shook his head at her as if he were somehow disappointed in her. Then he tsked. Motherfucking tsked!

“Same old Sydney,” Lucas Strong said as he looked up at her again now with a raised brow. Then he looked down and smiled. Changed his tone. “Yep, same Syd. Jumping to conclusions and looking down on people,” he mumbled.

Sydney grabbed her daughter’s hand and turned on her heels, stomping back toward the employees- only section. But mid- stomp his last words overtook her. She looked back at him looking at her. How was it the perfect boy from her past had the nerve to be sit­ting there looking every bit the perfect man and still give her the same off- kilter feelings he had all those years ago? Making her speechless. Able to do nothing but retreat.

She pointed at him. “And you’re still the same old Lucas. Mind­ing other people’s business like a know‑it‑all when you really don’t know a damned thing.”

A native New Yorker, Kwana Jackson had two dreams: (1) to be a fashion designer and (2) to be a writer. After studying fashion design and graduating from FIT, she spent ten years designing for various fashion houses. But after having twins and juggling both them and fashion, Kwana took a leap of faith and decided to pursue her other dream of being a writer. Since then she's won RWA NYC's Golden Apple Author of the Year Award and is a daily advocate for #WeNeedDiverseRomance. She currently lives in a suburb of New York with her husband, their twins and a precocious terrier named Jack who keeps her on her toes. Learn more online at kmjackson.com.
at July 30, 2022