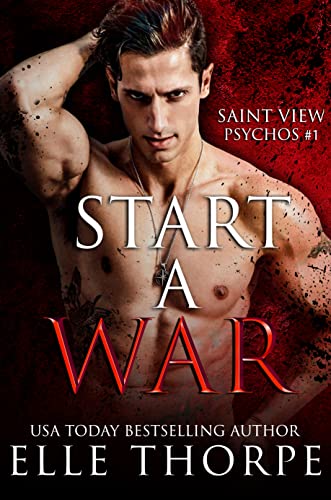 “Do you want some Goldfish crackers, Bliss?”Those were the last words my brother said to me before he was shot execution style. A childhood code only he and I knew, and one that had a single, clear meaning behind it.Run.I’m not going anywhere. Not when his murderer is still out there.To catch a killer, I put aside my life of money and luxury and take over the running of Psychos, a dive bar in the seedy underbelly of Saint View.But Psychos delivers more than I ever could have bargained for and three men I never saw coming.Nash, my brother’s best friend. Older and more experienced, he still remembers me as the neglected child he once saved.War, heir to a biker gang throne and searching for the man who left his mother in a coma. Bonded over a common goal, he introduces me to a world of after-hours clubs, danger, and violence.And Vincent, the quiet new guy nobody seems to see except me. He’s sweet and quirky, but there’s a darkness in him just waiting to be unleashed.With every lie we uncover, every secret we expose, the danger mounts.Until there’s only one thing we know for sure.The killer is still out there.And we’re his next targets.Start a War is an adult, #whychoose romance, meaning the main character has more than one love interest. This book contains romantic suspense / dark themes that may trigger some readers. It is the first book in an ongoing trilogy.

Momma Says: 5 stars⭐⭐⭐⭐⭐
"For all the women who like their fictional men dark, sexy, and stabby. This one is for you." The dedication in Start a War pretty much sums it up. Except I didn't know I liked dark, sexy, and stabby—okay, I knew I liked dark and sexy, but stabby? Then Elle Thorpe introduced Vincent in the Saint View Prison trilogy, and well, okay - I like stabby too, at least where Vincent is concerned.
This first Saint View Psychos book introduces the main players, and true to form, Elle pulls out all the stops. It's not hard to figure out which relationship starts the fun, as the title suggests, and the whiplash-inducing twists suggest that things are gonna get tricky. And I'll just leave that right there, so I don't give away the book's secrets.
What I will say is this introduction to Bliss and her guys is a combination of shocking and sexy. It's deliciously dark and edge-of-your-seat intense, and I can not wait to see what's next.