A little blue world, the third planet from the sun. It’s home to seven billion people with all manner of faiths, beliefs and customs, divided by bigotry and misunderstanding, who have been told they are not alone in the universe. Anyone watching from the outside would pass by this fractured and tumultuous world, unless they had no other choice.

It’s been a little over a year since Todd Landon’s life changed with the arrival of the Nentraee. Continuing his duties as Special Envoy for Terran Affairs, Todd finally feels at home with the aliens; gaining more responsibility and influence with both races. Plans are underway for two Interplanetary spaceports and additional solar exploration. It’s an exciting time for both the humans and the Nentraee.

Not everything is as perfect as some hope. Speaker General Mirtoff and Vice-Speaker Mi’ko of the Nentraee are worried that the Liberi Dei plot additional terrorist attacks and may have inside help. Threats are clear, but who can they trust? Could Todd be helping them unknowingly or worse covertly? Will these new space endeavors continue to bring the human and the Nentraee together or will a conspiracy hiding in the shadows fracture an already shaky alliance?

The Security Training area appeared ordinary, especially since the space was in a secured part of the ship. Yes, the area had grass and a few shrubs outside the façade, but the endless sky feeling didn’t exist here; overall, this area had been built more for function and less for form. Still, Todd was glad he had access to the location, and the gym had everything they needed for a good workout. He had even managed to have the Nentraee bring up some human gym equipment for his use, as he didn’t want to risk his life on the Nentraee equipment. Sure, the human machines got a few odd looks from the Nentraee security when he and Dan used them, but Vi-Narm confided in him several of the security personnel had tried the pieces and used them when no humans were around.

He cracked his neck, thinking of his earlier conversation with Brad. Seeing his brother again would be a nice treat, and Brad had been correct: too much time had passed since Todd had seen Brad or the rest of his family down on Earth. The infrequent visits weren’t all his fault; so much had changed over the last year, and he had a lot of work to do, especially knowing Liberi Dei continued to lurk out there, waiting. A shudder ran down his spine. Martha’s words still haunted him.

Too bad you won’t live long enough to find out. What had she been organizing? Her death was a shame really, killed by her own people before he found out what she and Liberi Dei actually wanted. However, they were still out there planning. Which added to his frustration of late: Mi’ko and Mirtoff no longer included him in anything to do with the terrorist organization, saying keeping him detached from the matter kept him safe.

Todd had no reason to doubt them, but something tickled the back of his mind and he wasn’t sure if this was the only reason they kept him in the dark about Liberi Dei.

He missed the tick of his pocket watch.

So much has changed.

He dug through his bag, pulled out his pocket watch, and checked the time.

“Where is he?” Todd huffed and put the timepiece in his gym bag, his hand brushing along the cool surface of his datapad.

Dan should have been here twenty minutes ago; at this rate Todd would barely have enough time for their workout and for him to get changed and ready for the interview.

A chirp called his attention.

Todd reached into his bag and pulled out his datapad. Now what? He tapped the pad to activate the device.

“Dan!” Todd’s voice called out louder than he had hoped, but no one around him seemed to notice. “Where are you? You’re late.”

“I know.” Dan’s expression remained flat with no Danness to flavor his words. “Listen, I’m heading to Earth. I have to see my family and take care of some things.”

“What? Is everything okay?”

“Fine.” Dan’s tone faltered and his expression sank. “They’re fine, sorry; just a lot going on and my mom isn’t getting any younger.”

The communications ended and the Nentraee seal appeared.

“What the hell?” Todd shook his head and dropped the pad into his bag.

Todd raked a hand through his hair. Well, now he would have plenty of time to get ready for the interview. He made his way over to the lockers to change into his work clothes and ceremonial robe. Once Todd cleaned up, he made his way out of the locker room.

He turned to see Vi-Narm standing there in the equivalent of workout wear: loose pants and a flowy top.

“Shouldn’t you be getting ready to meet with GNN?”

Todd nodded. “I planned to get in some training with Dan today, but…”

“If you would like to train, I would be happy to workout with you, after your duties.” Vi-Narm tossed her long ponytail over her shoulder.

Todd picked at his deep-blue ceremonial cloak, the one given to him by Mi’ko and Mirtoff to represent his standing in Nentraee society. The cloak draped over his shoulders, and the wide embroidered collar with silver stitching sparkled as the threads caught the light. He checked the two large silver clasps with matching deep-blue stones attaching the cloak to his shoulders. The ends of the cloak fell to the floor, revealing the embroidery as the stitching continued down to each of the eight symbols representing the Nentraee clans and the one representing humans.

“You look respectable for your position and the purpose of your meeting,” Vi-Narm said.

“And with that not-so-shining endorsement, I’ll head off.” He winked at her. “Thanks for the offer to work out. I’ll have to take you up on the suggestion, especially if Dan keeps ditching me.”

On his way out, he gave one more glance over his shoulder to the facility and the surrounding area. Dan and he were supposed to work out twice a week, and yet over the last several months Dan had cancelled many of their get-togethers, not just the workouts. Each time they met, Dan appeared more preoccupied. More distant. Todd shook his head. At least he still had Brad’s visit to look forward to, even if he would be here for work and not play.

He felt the tick of his pocket watch and marched on in time with each tick. Once he found a viewport, he glanced out, seeing one of the Speaker General’s ship’s parks. A group of xĩmé flew by, the deep blue of their feathers a contrast to the yellow leaves of the nabutimaba tree. He chuckled and shook his head. Recent events seemed insane to him, like something out of some sci-fi series.

“What a year.” He sighed as he continued on. 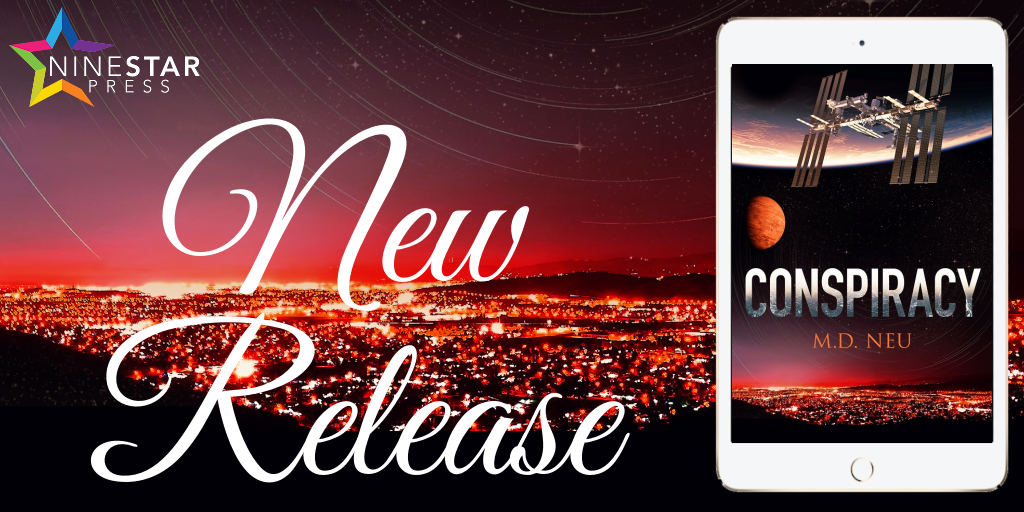 M.D. Neu is an award-winning queer Fiction Writer with a love for writing and travel. Living in the heart of Silicon Valley (San Jose, California) and growing up around technology, he’s always been fascinated with what could be. Specifically drawn to Science Fiction and Paranormal television and novels, M.D. Neu was inspired by the great Gene Roddenberry, George Lucas, Stephen King, Alice Walker, Alfred Hitchcock, Harvey Fierstein, Anne Rice, and Kim Stanley Robinson. An odd combination, but one that has influenced his writing.

Growing up in an accepting family as a gay man he always wondered why there were never stories reflecting who he was. Constantly surrounded by characters that only reflected heterosexual society, M.D. Neu decided he wanted to change that. So, he took to writing, wanting to tell good stories that reflected our diverse world.

When M.D. Neu isn’t writing, he works for a non-profit and travels with his biggest supporter and his harshest critic, Eric his husband of twenty plus years.