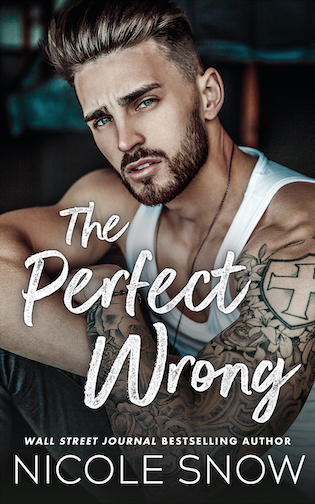 Everything that could go wrong did.
The evil smile on my bestie’s face should’ve screamed bad idea. But I took her “easy” bet:
Find a man before summer ends. Renounce my V-card. Enjoy life.
I thought I was entitled to the same sweet ritual every girl deserves—until a force of nature blew in.

His name is Chris Triton.
Tattooed god. Moody ex SEAL. Zero filter. Born to drive me bonkers.
We barely spoke for ten minutes before he kissed my soul out.
Too fast. Too intense. Too flipping good.

Then I found out we’d be sharing the same roof the very next day.
Dad marrying his mom squashed our little chemistry experiment instantly.
You know, the normal reaction. But Chris doesn’t do normal.
Or predictable.
Or sane.

Still, I’m sure he’s playing some twisted game when he keeps teasing the unthinkable.
I think he won’t scorch my heart black until the Vegas trip—another hilariously bad idea.
It’s just us and a tension so thick you can chew it.
Just an unexpected hero charging to my rescue.
Just one freaking bed.
What the hell do you do when the perfect wrong feels undeniably right?

A full-length forbidden romance with sizzle, jaw-dropping sass, and all the heart-stompy butterflies impossible Happily Ever Afters are made of. Witness one growly protector battle the worst luck in the known universe to throw his princess over his shoulder and bring her home forever.

I’m not crazy overprotective of Dad’s property, but this guy shouldn’t be messing around out here, especially after sunset. He could easily get hurt.

Also, I’m guessing he missed the bright-red PRIVATE PROPERTY signs lining the cliffs every twenty or thirty feet at the edge of our property.

Finishing my drink with a huff, I set my glass down on a rock and start to approach him.

I still can’t make out much in the dull light. He’s too far from the party’s bright lights to be more than a massive shadow.

And his back is turned, his head bowed and focused on his diving gear like it’s the most important thing in the world. His mask and oxygen tank are off by the time I’m standing a few feet away, and he’s working on that wet suit.

He sheds it quickly like a second skin, revealing a statue cut from pure granite underneath.

…is he completely naked under there?

I suck in a breath so sharply I’m surprised it doesn’t startle him.

I’m a little relieved when I see navy-blue trunks as he kicks off the rest of the suit—but only a little.

This man is a sea god heaved up by the deep.

His back alone looks powerful, refined, like a rock-hard swimmer who’s been mastering his craft for years.

His tattoos are one with the night, a warning of sharp, vicious, dangerous things.

Oh, and he’s big—he must be pressing seven feet in all his giant glory—but he’s so smooth, so sculpted, so graceful.

His skin looks natural, healthy, and real in a way Marnie’s Tangerine Man never will be.

I’m living out every awkward smut heroine’s moment where she catches the hot guy half-naked and you can bet he’s about to spin around and chew her out in T-minus one second.

And I know it’s silly to prefer a body cased in ink rather than too much tanned leather, but I can’t help myself.

I cough, deciding we’d better speed this up.

When he starts turning, my eyes almost bug out.

His broad chest could slay a whole gaggle of underwear models—even if they laid their perfect bodies under the world’s best tattoo artists.

More dark stripes slither up his arms, pitch-black flames licking his biceps, and something dark and beastly and menacing covers his broad chest.

The monster sprawls across his skin, guarding what looks like a pitchfork. It kind of reminds me of my gramps’ old Navy patches that Dad keeps hanging in his office. He’s always been proud of them.

Probably somewhere in his mid-twenties, fresh out of college with a dark glint in his eyes that only a heavy life can bring.

His are bright green, set in his chiseled face like sinful emerald framed with just the right amount of cropped sandy dark hair and stubble that could scratch so sweetly on a woman’s skin.

His tight jaw holds the most capable mouth in the world, lips made for kissing and cursing and giving the whole world hell.

Maybe even one especially lucky lady.

“Didn’t know I had an audience. How long you been there gawking while I strip?” he growls, giving his rubber suit a swift kick behind him and marching toward me. “Where’d you come from, princess?”

In my little stare down, I forgot I walked out here to remind him he’s trespassing.

Nicole Snow is a Wall Street Journal and USA Today bestselling author. She found her love of writing by hashing out love scenes on lunch breaks and plotting her great escape from boardrooms. Her work roared onto the indie romance scene in 2014 with her Grizzlies MC series.

Since then Snow aims for the very best in growly, heart-of-gold alpha heroes, unbelievable suspense, and swoon storms aplenty. With over a million books sold, she lives for the joy of making two people fight with every bit of their soul for a Happily Ever After.