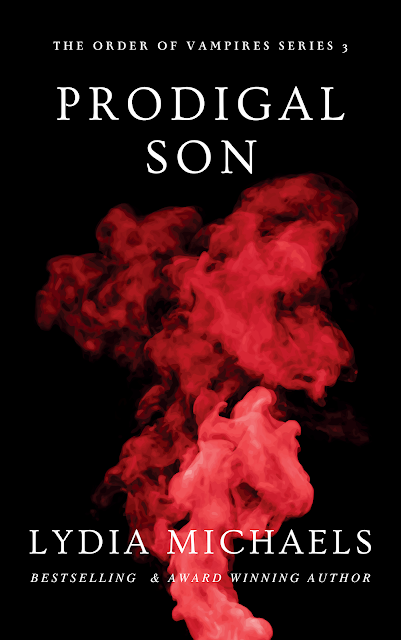 Bestselling author, Lydia Michaels, weaves a ferociously addictive tale of immortal hunger, lust, and noble sacrifice in the haunting continuation of The Order of Vampires series.

Cain Hartzler has a tortured past and a score to settle. After losing his destined mate, he is sentenced to an eternal life of pain and solitary sacrifice. To serve a purpose, he enters a deadly crusade to hunt and destroy the lethal vampire butchering mortal females in the Pennsylvania woods. But his honor is put to the test when the meddlesome news reporter, Destiny Santos, gets in his way.

Foolish ambition drives Destiny into the woods, but rather than find a lead, she discovers a sinister army of feral vampires out for blood. Desperate to escape, she shoots the one immortal willing to protect her from certain death.

As sinister vampires close in, Cain has no choice but to take the blood of the human female to survive. Mortally injured, he must escape the woods alive, or break his greatest vow.

Momma Says: 5 stars⭐⭐⭐⭐⭐
I was so excited to get my hands on Cain's story, and it does not disappoint. It's as emotional, gritty, and intense as I expected and then some. These characters have wormed their way under my skin, and I'm thoroughly invested. Cain's circumstances tug at the heartstrings in so many ways. I've wanted others in the series to find their HEA/HFN, but none so much as Cain. Whether he got there or not is for each reader to find out for themselves (no spoilers here). What I will say is there is a lot going on in this 3rd book in Lydia Michaels's The Order of Vampires series, and I was totally glued to my Kindle from word one. I would highly recommend reading from the beginning of the series because a lot of what's happening here started back at the beginning. You won't be sorry, and if you're as hooked as I am by the time you reach this one, just know that you won't be the only one who's impatiently waiting for the next book in the series.