by Keith A. Hamilton 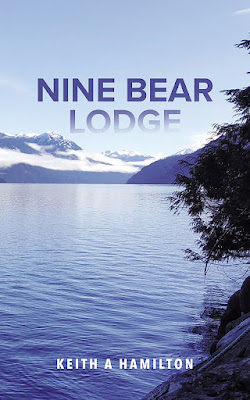 The beautiful Bella Coola Valley in British Columbia provides a dramatic backdrop in a story of two men who crossed paths years before, who meet again by chance. Taking his family on a bucket list vacation, a former smuggler confronts the former policeman who had arrested and tortured him many years before. The family enjoys the luxury setting and the variety of activities provided by the Nine Bear Lodge, while the two men come to grips with their shared past. Will one man take the ultimate revenge, or will they both find a path to redemption and reconciliation?

Hans thought also about the last futile years, swimming upstream against a tide of corrupt or inept coworkers, trying to fulfill the wishes of the increasingly paranoid and delusional leaders in Berlin. And now his supervisor was talking about setting him up as a scapegoat. This would not do.

It was early November, and around him in Rostock and all of Germany the times were quickly and irrevocably changing. Hans left the office, telling his secretary he would be out for the rest of the day. He had to walk to clear his head. Hans walked out into the gloomy light of the overcast day, rain spitting down fitfully, turning into ice as it clung to the metalwork of the fences and light poles along the roadside. He headed for the ferry terminal, taking one short detour on the way. He showed his pass to the border guards and was waved perfunctorily through. They knew not to question the Deputy too closely. Hans boarded the next departing afternoon ferry, which happened to be for Trelleborg, Sweden. As the boat slipped out of harbour, he surreptitiously dropped his Stasi credentials over the side. Hans Klein disappeared. In a couple more days, the Wall came down, and everything changed.

Since the early 1990s, Keith A. Hamilton has lived and worked in small remote Indigenous communities throughout Northern and Western Canada. He has made Bella Coola his home since 2016. He and his wife and their dog enjoy the beauty and serenity of the Central Coast region.

The author will award a $15 Amazon/BN GC to a randomly drawn host.

a Rafflecopter giveaway
at December 30, 2022

Political Thriller Date Published: June 17, 2022 Publisher: Mindstir Media   "Over my dead body would I ever leave ...