In the Moment Before by C.G. Coppola Virtual Book Tour 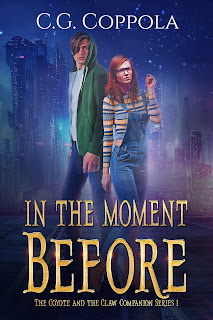 In the Moment Before
The Coyote And The Claw
Companion Series Novella 1
C.G. Coppola
Genre: New Adult Urban Fantasy Romance /
New Adult Paranormal Romance
Date of Publication: 12/16/2022
ISBN: 9798201753146
Word Count: 39,000
Cover Artist: Wicked Smart Designs
Book Description:
I hate Grayson Knight with a passion. Ever since he pulled a prank on me as kids, I’ve kept him in the mortal-enemy category, and we both prefer it that way. Now we’re seniors in high school and he’s still the same immature jerk. I avoid him as much as possible, but when an argument turns ugly and lands us in detention together, I know my life is over—especially when my dad, the city’s police sergeant, finds out.
I have no idea how we’ll get through this, so I’m surprised when Grayson comes to my rescue after I’m cornered by a sleazy basketball player. Suddenly, the boy I’ve always hated isn’t the enemy. If seeing him with new eyes isn’t confusing enough, a secret kiss sends everything scrambling, leaving me to figure out what I want, and if I can even have it. Because Grayson isn’t like other boys—and I’m starting to find out why.
Amazon     Books2Read

“You said none of it was true.” I tighten my arms over my chest, leaning against the wall, hoping it supports me because this is about to get tough. “That people were spreading lies.”

“They are lies. We’re not dating.”

It’s like I’ve been punched. I know what he’s saying is true, but to hear it from him…and like that…doesn’t make it feel any better.

“You…didn’t think we were, did you?” He pops a brow, sliding his hands out of his pockets as he stands firmly in front of me, his olive hoodie unzipped. Surprise and confusion and something else brew behind his eyes, like he’s adjusting with new information.

I press my shoulders back, trying to project the confidence and strength I need. “That would mean I stopped hating you—and I haven’t.”

Pain flickers but disappears a moment later. He sinks his hands back in his pockets, rolling on the balls of his feet again. “You still hate me?”

“Well, it’s only physical between us, right?”

“That’s…what I want to talk about.”

“Yeah?” I ask, tightening my crossed arms further. “And why should I believe anything you say? Last time you said it was a mistake, and you’ve only come on stronger since.”

I drop my arms. Is he being serious this time? Does he really want to stop this? Why is that thought agonizing?

My chest constricts, and I can’t believe the words as they tumble out of my mouth. “So, you don’t want to…anymore?”

He glances away. He takes a deep breath like he’s still considering everything. “Probably not smart. We’re enemies, Robin. We had some fun, but—”

“You’re seriously kicking me out?”

“If you’re telling me this has all been a mistake—”

“No, the fuck it isn’t.” He steps forward, raising his voice a little. “I don’t regret anything, okay? But I also don’t think it’s smart. I don’t do the girlfriend thing and keeping this strictly physical isn’t going to work. And, on top of everything, it’s you—”

“What’s that supposed to mean?”

He huffs. “It doesn’t make it any easier.”

I push off from the wall and pace in a small circle, everything inside boiling. “So, what, we just pretend none of it happened?” I ask, secretly hoping he disagrees.

This hurts more than I expected it to. Part of me wants to cry, and I hate that he makes me feel this way, that he’s able to hurt me like this. I stare at him, anger still fueling my words and actions. And maybe it’s the anger that makes me brave enough to ask what I’ve been wondering this entire time. “If we’re enemies, why did you even kiss me?”

He stares back a moment, his face softening. He’s had the answer ready all along; he just didn’t want to admit it. “I was tired of wondering what it would be like.”

About the Author:
C.G Coppola is the author of the sci-fi adventure series, Arizal Wars, and the contemporary romance series, Better Than This. In addition to stories that explore magic and the paranormal, she writes realistic fiction set in fantastical universes, usually with a lot of kissing. Married with two fur-babies she spoils rotten, C.G. Coppola lives in Florida where she grew up and attend college. When not writing, she can be found decorating the house, bantering with her husband, or dancing to Meghan Trainor—sometimes all at once.
Author website: https://authorcgcoppola.com/
FB page: https://www.facebook.com/cgcoppola
Newsletter: https://landing.mailerlite.com/webforms/landing/p2u9h3 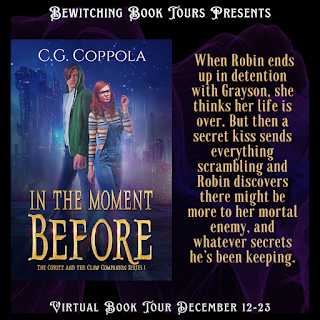