The Glint of the Luopan by Sally Feng Virtual Book Tour 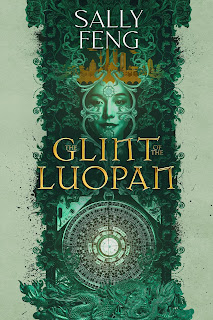 The Glint of the Luopan
Sally Feng
Genre: Urban Fantasy
Publisher: CinnamonBooks
Date of Publication: 11.11.2022
ISBN: 978-3000739385
ASIN: B0BKY2KQ15
Number of pages: 292
Word Count: 65.000
Cover Artist: MiblArt
Tagline: A Daoist journey through New York and Beijing. A secret society. A young woman on a mission to find her dad.
Book Description:
Lai Fang, a Chinese native living in New York, is working to recover her lost memory and find her father. Along the way, she finds herself in the arms of the mysterious Suresh who supports her search in unconventional ways.
Guided by a Luopan, scattered remnants of recollections, technology, and a little magic, Lai Fang desperately clings to what she hopes will be the path to her truth. However, what if the truth lies far beyond the scope of human comprehension? What is the truth to begin with?
The Glint of the Luopan weaves a mesmerizing web of a world that begins as a dream and unfolds in a journey for family, hope, and love.

The elevator jerked to a halt and the doors slid open to a circular room with high Greek-looking columns in the corners. Everything was in muted colors, beige, and blue-grey.

In the middle, there was a circular table with a model of China on it.

“So, this is where we plan our utopia, or at least its rough outlines.”

Izzy went up to the table and propped her hands on it.

“These are all regions in China where we have established so-called cities in the sky. You might even have seen a picture of it on the news that went viral a couple of years ago, in Foshan.

Unfortunately, we haven’t been able to prevent it from becoming public. Of course, most people took it for a mirage, a Fata Morgana.”

“Cities in the sky?” I had actually thought that nothing could shock me anymore, but this was just unbelievable.

“Yes. As of now, about half a million Chinese people live there. We are still in our experimental phase, but so far, we have made good progress.”

She talked about it as if it was an everyday thing.

“You know, China has had a demographic explosion during the last couple of years, after the pandemic. Even during the one-child policy, population growth was significant, especially in the countryside. China couldn’t admit that to the rest of the world. The outcry and the fear would have been enormous. Not to mention, the Chinese themselves began to suffer from the density of the population in the cities. They began to house people everywhere: in cellars, in tents, but there were just so many. Also, the space programs didn’t bring the desired success.” She stroked the table.

“So, the Dreamer Society began to look for other options. They rounded up a team of people from all disciplines – geologists, biologists, remote viewers – to map out a future for the Chinese population. What they found was just so, so much more interesting than anyone had ever thought.”

Izzy took a deep breath and pushed a button next to the model of China. There was a whirring sound, something opened in the middle of the model, and a glass pillar rose up. At the same time, a hissing sound rang out as the pillar f illed with smoke. I couldn’t take my eyes off it. Slowly, very slowly, tiny outlines began to form out of the smoke. They looked strangely solid. The smoke pooled into walls and roofs, culminating in towers...

“This is Jindan, the substance used for creating the sky cities. It’s a kind of energy that can condense into something solid. Initially, it was only used for manipulating the weather, like at the Olympic Games. Then we found out how powerful it really is. If you achieve a tremendous degree of compaction, you can actually create solid bodies. It is said to be inspired by the early Daoists who practiced inner alchemy.”

The smoke in the glass pillar was still forming and condensing. By now I could also see small roads. I slowly circled the pillar, keeping a cautious distance, and found more and more details.

“I mean…how do you create whole, life-sized cities?” It seemed suitable for a small project in chemistry class, but how could you create something lifelike with it?
Izzy circled the model and looked at the pillar as well. “Guess why it’s called the Dreamer Society?”

“It turned out that the Jindan substance interacts very well with dream energy. Before that, the Society experimented with all sorts of things – hydrogen, carbon, and so on. Then, someone had what is called a ‘happy accident’. They fell asleep in the lab, and when they awoke the next morning, their dream was hanging from the ceiling. In 3D and touchable. Then, they went from there. Actually, what you see in the pillar is a sky city in its purest form, without dream energy.”

I searched Izzy’s face, but I couldn’t find any trace of exaggeration.

I didn’t know how much more absurdity I would endure. I only knew that the sky city in the vessel was the most beautiful thing I had ever seen: an airy, fluffy-looking, slightly glittering thing, like cotton candy that seemed to be constantly reassembling itself.

About the Author:
Sally Feng is an expert in Chinese culture and philosophy and loves to spread the word about these topics. She holds a Master’s degree in Literary Translation and Sinology. Her interests also include the paranormal and Asian religions.
After completing her first novel translations for different publishers, she published the Urban Fantasy title “The Glint of the Luopan”. It's set in New York and Beijing and deals with Chinese magic and philosophy, among other things.
She works as an author, translator and editor. "The Glint of the Luopan" is her third novel.
Blog: https://laemmchen.blog/
Twitter: https://twitter.com/sallyfengwriter
Instagram: https://www.instagram.com/sally_feng_writer/
Facebook: https://www.facebook.com/profile.php?id=100072092851949 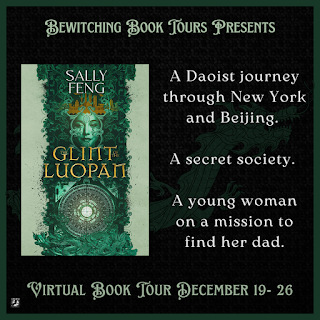 a Rafflecopter giveaway
at December 21, 2022