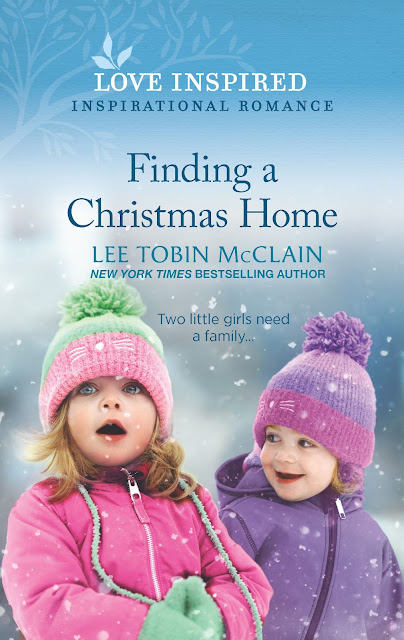 They are his nieces…

But she can never tell him.

As the new guardian to her twin nieces, Hannah Antonicelli is determined to keep her promise to her late sister—that she’ll never reveal the identity of their father. But when the girls’ uncle, Luke Hutchenson, moves in next door and takes a job where Hannah works, the truth threatens their growing connection. How can she keep the secret when she can’t even guard her own heart?

Add Finding a Christmas Home to your Goodreads!

Momma Says: 4 stars⭐⭐⭐⭐
An animal rescue, a set of adorable 18-month old twins, and a reformed bad boy. Finding a Christmas Home had me with those 3 things, and Lee Tobin McClain did not disappoint. The story is definitely emotional, and my heart went out to Hannah as she dealt with everything thrown at her - the loss of her sister, instant motherhood, and a secret that maybe shouldn't stay a secret. Of course, her romantic interest would have to be tied to that secret. And of course, said love interest would steal my heart as well. I really liked Luke and Hannah together, and those babies are just too sweet for words. It's much less exhausting reading about that age than the reality, and the twins were great for tempering the emotions of the story. I thoroughly enjoyed this one, emotions and all. It's a story of family, loss, faith, and finding that special, one-of-a-kind love.
🞿🞿🞿🞿🞿

Hannah Antonicelli walked out of the Rescue Haven Learn-and-Play and flopped down on the bench that ran along the wall of the red barn.

“Cold for sitting outside, isn’t it?” Her friend Gabby wrapped her heavy parka more tightly around herself before sitting beside Hannah. Despite the fact that she and her husband oversaw all Rescue Haven’s programs—the dog rescue, the after-school program for at-risk boys and the childcare center—Gabby always had time to stop and chat.

And Gabby was right: November in rural Ohio wasn’t sit-outside weather. Wind whisked across the neighboring cornfields, rustling the dry, light brown stalks, carrying with it the faint, clean smell of oncoming snow. “I just need a minute before I start with the dogs,” Hannah said.

“Take a minute! Take an hour, or the whole morning off, if you need. It’s a great thing you’re doing, providing a home for Marnie’s girls.”

“The Learn-and-Play is the only possible way I’ll manage, so thank you for accepting the twins on short notice.” And she didn’t want to take advantage of Gabby’s generosity by skimping on her part-time job as the Rescue Haven dog trainer. What with everything that had happened, she’d already taken too much time off. Not to mention the fact that Gabby was pregnant and didn’t need extra stress. “Let me know if they need anything or get upset.”

Caring for her sister’s eighteen-month-old twin girls had been the right thing to do when Marnie had died of complications after a drug overdose two weeks ago. The desperate phone call from her estranged older sister had shaken Hannah’s world at its foundation. She and Mom had rushed to Marnie’s side and instantly agreed to care for the twins they barely knew.

Which meant that, for now, Hannah was back in her childhood home. Mom’s house had plenty of space, a big yard with a tire swing and was close to Rescue Haven.

Anyway, until they got the twins’ lives in order and their schedules figured out, it was going to take two of them to manage things. Being in the same house was just easier.

Mom was busy trying to keep her struggling bakery afloat during hard times. She was also grief-stricken and guilt-ridden over Marnie’s death—not in any shape to be a primary caregiver. Whereas Hannah… Hannah was more angry at her sister than anything else. Marnie had neglected her babies. She’d caused terrible pain to their mother. And she’d entrusted Hannah with a secret that wasn’t going to be easy to keep.

The blond, curly-haired twins had instantly become Hannah’s priority in life. She had to raise them right, and she would. She yawned. The twins hadn’t slept well last night—again—and she was just so tired…

She might have actually dozed off for a few seconds, and when she opened her eyes, she felt like she was dreaming. “Who’s that?” she asked Gabby as she stared at the movie-star-handsome, rugged man striding toward them.

Hannah’s stomach lurched. “When did he come back to town?”

Lee Tobin McClain is the bestselling author of more than thirty emotional, small-town romances described by Publishers' Weekly as enthralling, intense, and heartfelt. A dog lover and proud mom, she often includes kids and animals in her books. When she's not writing, she enjoys hiking with her goofy goldendoodle, chatting online with her writer friends, and admiring her daughter's mastery of the latest TikTok dances. Learn more at www.leetobinmcclain.com.