When the Glow Lights the Woods New Release Blitz

Title:  When the Glow Lights the Woods

A snowy story of healing, birds, and the magic of connection.

The Wall? Who gives a snowman’s kiss about when the wars ended, or who built the divide that goes all the way around the planet? Whatever!

All anyone cares about is Christmas, when one lucky person gets to date someone from the other side. Who will it be this year?

Eighteen-year-old Kite Ripples loves birds, animals, and gazing at stars. He’s a good brother to leader, Mal. Mostly. As teacher, it’s Kite’s responsibility to dispel the rumours about people on the other side being robots—just a myth, right? Deep down, he understands no human is better, or worse, than any other. And, if he dreams of meeting a guy like him—who wants to kiss—it doesn’t mean Kite’s a rebel. Not he!

Manu Feathers, also eighteen, lives on the other side. Gets into trouble. Likes boys. Breaks laws and wants more. Like everyone, he’s fixated on those over the divide—simultaneously scared and excited by rumours of too much sex. It’s a lot to get your head round.

Kite is selected to climb under the Wall, and it’s the best Christmas present ever. But nothing goes to plan. Instead of picking the perfect boy, all he notices is the guy on the end, acting out. Who’d choose a nuisance like him?

Can the highest Wall prevent first love? Can a kiss heal a baby bird?

By breakfast time on the first day of December, I was dizzy with excitement. Drunk from the intoxicating question on everyone’s lips. Barely able to focus. More talkative than normal and in no way fit for work.

Is the Wall glowing?

I didn’t dare hope he’d allow me to skip duties, but it was worth a try.

“Mal? Can I miss work today? How about it, huh? It’s very important to be mentally ready. You know—because of representing our side. You don’t want me nodding off. I’m extremely tired from the, er, stress.”

Is the Wall glowing? Is it?

My brother remained strict and inferred I was a lazy oaf.

Normally, I’d have stayed around to point out the scientific flaws in his doubtful logic but didn’t fancy a battle. Not so close to Christmas.

Despite sparkling frost and breaky-necky ice, duties beckoned. I fed the chickens and collected eggs—fifteen, woo-hoo. Attempted to fix their enclosure fence and forgot to close the gate. The hens squawked with glee and galloped off over the frozen parsnip fields. Not even such catastrophe dampened my spirits—I hopped over to my brother and innocently raked leaves.

“Ma-aal? Someone’s broken the fence. The hens are free. Could you?”

With herculean efforts, I survived the day, even managing a sneaky read, albeit a quickie. We weren’t supposed to read during work time. If my sister found out, there’d be trouble. Bar knocking myself unconscious, what else could a guy do? Reading remained the only certain method of calming frazzled nerves. My equilibrium, tenuous at best, was ruined by the magnitude of the occasion.

Glow day! Man-o-the-moon. After a lifetime of wishing, my dream hovered within a snowman’s breath. I, Kite Ripples, teacher—chosen to sound the annual alarm. Maybe. Hopefully. If the time was right.

A guard’s duties were fairly simple: on the first of the month, the anointed—me—trudged the length of the fruit fields and across Troll Bridge. Through Frogs Wood and onwards to the Wall, I went with the question mentally lit like the brightest fire.

Is it Glow Day?

The distance to the Wall from our caravan wasn’t far. The ground between tended towards bogginess, conditions often cold enough to freeze resolve. Still, it was a very easy journey. Just…follow the Wall. It ran through our land and on forever, covering the planet, or so people said. Not even Kite Ripples could get lost, and I was extremely talented in that particular department. My brother liked to tell stories of tying toddler me to the kissing tree because of my childish wandering habits. Always curious, even as a tiny boy.

We each got a turn to be guard, even me. At eighteen, I was the youngest of my generation and the only member not yet anointed. People said going under the Wall changed your life and perspectives. My sister, Ana, claimed the experience made her crave stability. Following anointment, she partnered Rich and produced three gorgeous kids. When I asked why going under the Wall caused such an effect, she shrugged and said I’d have to wait to find out. It was different for everyone.

According to Mal, the magic occurred during the infamous meeting between anointed and special person. Nobody agreed on the details. Many argued it manifested as immense happiness. Mal stuck with his theory about magic emanating from the glow like green, seeking fingers.

What if all I sensed was a stomachache? Kite Ripples got the sicks, ha-ha-ha.

Halfway through the tunnel, the anointed reached a metallic doorway positioned between two worlds. Some fled. My friend Luca had swivelled around at that point and headed for home.

I was determined not to run. Not me. Like my brother and sister before, I was hell-bent on reaching the other side and helping my people on their journey towards self-dependency.

Mal declared the return journey the most profound aspect of the whole process. Nobody remembered exactly what happened. Whereas most agreed the meetings were impactful, my brother claimed to have been ‘unchanged.’

Not true. Mal had been affected all right. Though normally a private fella who didn’t reveal much, following his anointment, he wept into my hair. Ever since, on the day of the glow, his eyes became starry, and he reached for the guitar. Despite my best efforts, he wouldn’t talk about what had happened over there.

The purpose of the meetings was simply to enable both sides to learn, to have experience without judgment. Our visits were strictly regulated by both sides. Elders had signed the important documents, such as aims and agreements, long before my time.

According to community histories, the elders were our parents. Who knew? They vanished when I was a baby. They’d set off with the intention of making alliances with lands beyond, far away, in the forbidden direction. None had returned. Amazingly, we survived, flourished, and expanded, even without elders. We lived off farms, orchards, rivers, and allotments, as well as a small library. Some years, we did well, others, not so good. It depended on the erratic, unpredictable seasons.

When the longest afternoon waned, Ana gave the nod, meaning I was allowed to set off. “Time to check the Wall. Be careful, Kite. Don’t trip and twist your ankle like Gurti.”

My sister always looked out for me, same as everyone in our land. I loved her and hoped to bring home good news. “I will. Don’t worry.”

Mal waited by the fence encircling our camp. He grinned and opened his arms. “My little brother. Are you ready for the glow?”

During the night, he said he wished he could accompany me. But, rules. The anointed must travel alone to check for the glow. It aided the process of ‘finding yourself’, according to Ana. Knowing me, I’d find myself and not like the person I met. Kite Ripples, anomaly.

My brother passed across a bag. “Water and emergency sandwich. Come straight home, yeah? If you’re not back by and by, I’ll come find you. Okay? If you fall and get hurt, just stay calm and wait.”

Worrying was not new. Mal, Ana, and the other older members of our camp tended to fear the worst. Because they remembered the elders leaving…

My brother had always babied me. Mal liked to be in charge, and I wasn’t as physically strong as the others. It bothered me when I was younger.

Despite a dodgy track record, I determined not to fall or do anything stupid. “I’m eighteen. Old enough to—well—tackle the world. Ha-ha. See you later.”

He watched me leave with arms crossed and an expression like a summer storm. “Be careful!”

As one, my community cheered my exit from camp. “Kite, Kite, Kite! Find the Christmas glow! Is the Wall glowing? Good luck. Don’t let robots turn you to stone.”

Mal said the rumour about the other side behaving like robots wasn’t true—a night story for kids, nothing more. Still, artificial people… With a shudder, I’d hidden the only book in the library about robots with blank eyes and metallic antennae. No point in dwelling.

Despite Mal’s warning about being surefooted, I ran. My emotions ranged from high—low—extra-high—low. By Frogs Wood, I was a mess, questioning if the time was right. What if I’d made a mistake about days and times? It was possible yet not likely, since I was a community librarian and teacher. Nobody else bothered with books or dates.

Head down, so as not to spoil the surprise, I finally passed the last tree of Frogs Wood and stepped into the clearing. High—low—high-high-high.

Man-o-the-moon! Green, pink, and yellow lights arched across our dense woods in a resplendent rainbow. Sparkling stars flashed and merged with the subtle shades of nature.

For a while, I was caught by the visage of ancient forces of light and dark squaring up for a fight. I stood, frozen by a green glowing pulse battering the gloom before retreating over the Wall.

When coldness bit, I stumbled towards home with an unsteady, painful gait—run—lope—run—trip. Frogs Wood and the winding river. A stitch. Run—lope—stumble—trip—stagger onto Troll Bridge.

Ahead, I made out the shapes of our caravans and the outline of my waiting brother. Excitement burst free into a yell-cum-shout. “It’s lit! The Wall is lit by the glow. I’ve never seen anything like it. Christmastime, Mal. Woo-oo. Tomorrow, I get to go under!”

Instead of cheering as expected, my brother gazed towards the woods, hands clasped together across his heart. His expression was difficult to decipher. 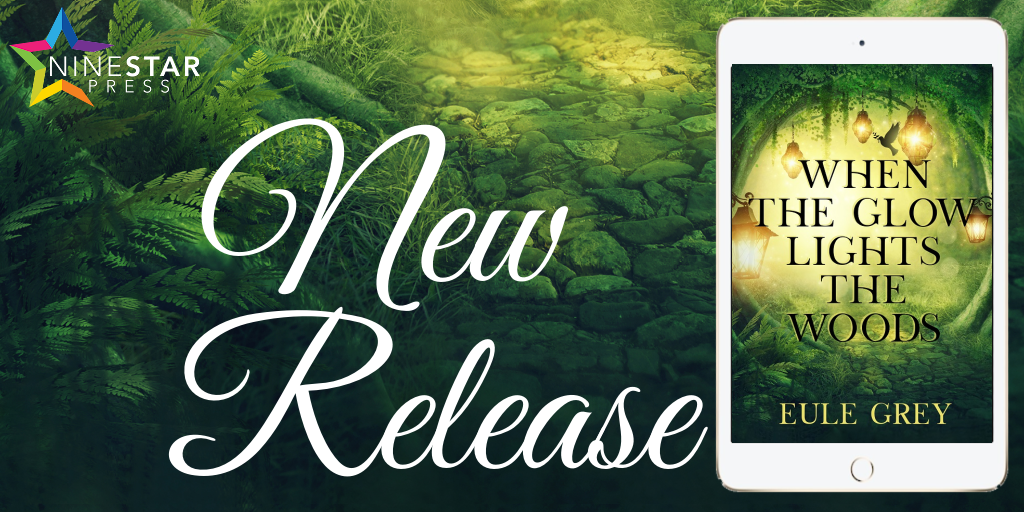 Eule Grey has settled, for now, in the north UK. She’s worked in education, justice, youth work, and even tried her hand at butter-spreading in a sandwich factory. Sadly, she wasn’t much good at any of them! She writes novels, novellas, poetry, and a messy combination of all three. Nothing about Eule is tidy but she rocks a boogie on a Saturday night! For now, Eule is she/her or they/them. Eule has not yet arrived at a pronoun that feels right.